Group of nuns seeking action against Bishop Mulakkal said they would continue their six day old protest till justice is delivered. 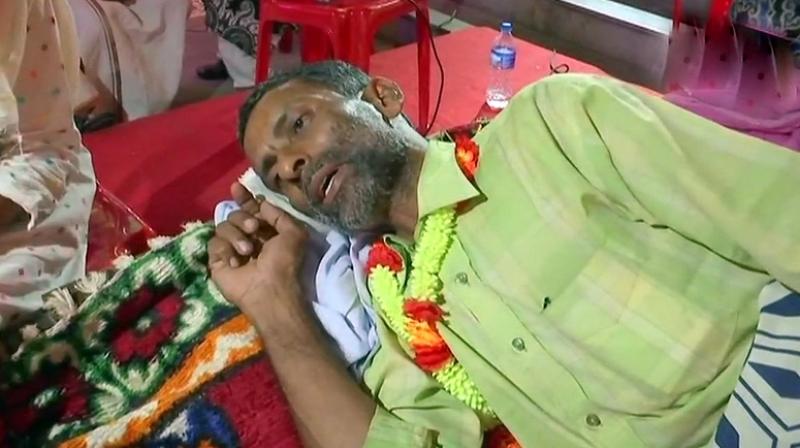 Kochi: Amid ongoing protests social activist Stephen Mathews is on a hunger strike for the past six days demanding the arrest of rape accused Jalandhar Bishop Franco Mulakkal.

Bishop Franco Mulakkal is accused of raping and having unnatural sex multiple times with a nun from Kerala between 2014 and 2016.

Bishop Mulakkal has been summoned by Kerala police for question on September 19.

Meanwhile, the group of nuns seeking action against Bishop Mulakkal said Thursday that they would continue their six day old protest till justice is delivered.

They said their agitation was not against the Church or its rules, but a cry, seeking justice for their victimised fellow nun.

The nuns said they would not have come out in the open had the Church authorities delivered justice.

The Kerala Catholic Bishop Council (KCBC) had Wednesday slammed the nuns' protest, saying that it has "crossed all limits".

It also noted that both the complainant nun and accused Bishop were members of Catholic family and the church shared their "wounds and agony".

The nun recently sought urgent intervention of the Vatican for justice and demanded the Bishop's removal as the head of the Jalandhar diocese, questioning why the church was "closing its eyes to the truth" when she mustered courage to make public her sufferings.

The Bishop had, however, dismissed the allegations as "baseless and concocted", insisting she levelled those as the Catholic order had rejected her demand for favours.

The KCBC had said the allegations levelled against the Bishop was 'serious', adding that whoever the accused may be, they should be punished if the charges were proved.

"This is the firm stand of the Church," it said.

KCBC had also alleged attempts by vested interests and a section of the media to tarnish the church and the bishop community as a whole under the cover of the protesting nuns and said this was not "acceptable".

Police should not succumb to any kind of pressure and complete the probe impartially at the earliest, Varghese Vallikkat, deputy secretary general and official spokesperson of KCBC, had said in a press release.

The protest of various Catholic reformist organisations in Kochi, seeking justice to the victim, entered the sixth day Thursday.

Many women leaders, including eminent writer Sara Joseph and social activist K Ajitha visited the agitators, who include five fellow nuns of the victim.