India   All India  13 Sep 2018  Nothing to be sad about: Damodar Rout after expulsion from BJD
India, All India

Nothing to be sad about: Damodar Rout after expulsion from BJD

The seven-time MLA was embroiled in controversy since last week after raising three alleged scams to the embarrassment of the ruling BJD. 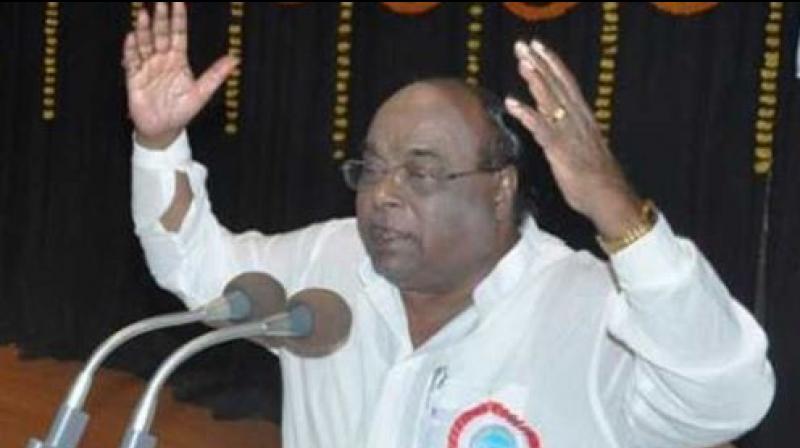 Rout also said that he was not aware of the reasons for his expulsion from the party. (Photo: Facebook)

The action came after a large number of Biju Janata Dal (BJD) workers met Patnaik at his residence on Tuesday and submitted a petition seeking disciplinary action against Rout.

"As per order of BJD president Naveen Patnaik, Paradip MLA Dr Damodar Rout has been expelled from the party," BJD secretary Bijay Nayak said in a statement.

Rout was also accused of making anti-party statements and hobnobbing with the Congress and BJP leaders in Jagatsinghpur district.

On his expulsion from the party, Rout said, "I have nothing to be sad over the action. I do not think I existed in the party. I was not in any party post."

The seven-time MLA was embroiled in controversy since last week after raising three alleged scams to the embarrassment of the ruling BJD as well as the state government.

While interacting with reporters, the veteran leader had alleged irregularities in sapling plantation, procurement of polythene sheets for Orissa State Cooperative Milk Producers' Federation Limited (OMFED), in cooperative bank and in health sector.

Earlier on Wednesday, Rout claimed that he never uttered a word against Patnaik and targeted only corrupt officers.

"I have not said anything against the chief minister. The CM has a lot of exposure as he toured world wide. He is a good writer and his book has been a best seller. He is also a painter of international repute. He is not part of the allegations which I have made," he had told reporters.

"Some people working under the chief minister are guilty. They are indulging in such activities. Nobody is bringing it to public out of fear. I tried it," the former minister said referring to alleged corruption he had mentioned.

On December 22, 2017, Rout was removed as agriculture minister over a controversial statement about the Brahmin community.

He had been minister in the Naveen Patnaik Cabinet in all the four terms from 2000. Since 1979, Rout had been in charge of more than 15 different departments during his long political innings after he became MLA for the first time in 1977.