Bailout package is being seen as a major move by BJP government to win support of Kashmiris. 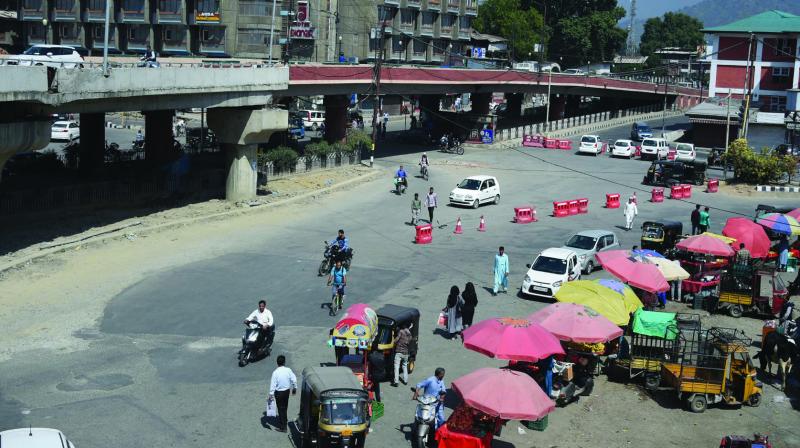 Vendors sell fruits at Jehangir Chowk in Srinagar on Thursday. Normal life remained affected in Kashmir as the stalemate following the abrogation of Article 370 entered its 39th day with schools closed and public transport off the roads. (Photo: PTI)

New Delhi: The government has committed over $800 million (over Rs 5,600 crore) to procure apples from apple-growers in Jammu and Kashmir to “support livelihood for these farmers”, the ministry of external affairs (MEA) said, in a major announcement, even as it lambasted Pakistan for its “lies anddeceit” during the recent UN Human Rights Council (UNHRC) session at Geneva, advising Islamabad that “repeating a lie five times does not make it the gospel truth”. The government also said Pakistan’s attempts to politicise and polarise the situation had been “rejected” at the recent UNHRC session. The massive bailout package to apple-farmers in J&K is being seen as a major move by the government to win the support of locals there besides countering the Pakistani propaganda that the people of the Kashmir valley are suffering.

“Economic activity is being given a boost. 700,000 farmers in J&K grow 2.2 million metric ton of apples. This being the harvest season, harvest of apple and other fruits and their transportation to marketis facilitated. Government has launched a ‘Special Market Intervention Price Scheme’ for price support tothe produce and will be procuring 1.2 million metric ton of apple, committing over $800 million, tosupport livelihood for these farmers,” the government said on Thursday. “Hospitals and medical facilities are functioning normally. There is no shortage of medicines. All 376 notified medicines and 62 essential medicines are available in adequate quantity. essential medicine worth `32 crore (approx $5 million) received in Jammu and Kashmir between 20 July-23 August 2019 (more than average). 6 weeks reserve of all medicines available in all government hospitals. ... 95% of health care professionals are on duty,” the government said.