Twitter promptly pointed out that it was Newton and not Einstein who discovered gravity and both scientists shot up in the trending lists. 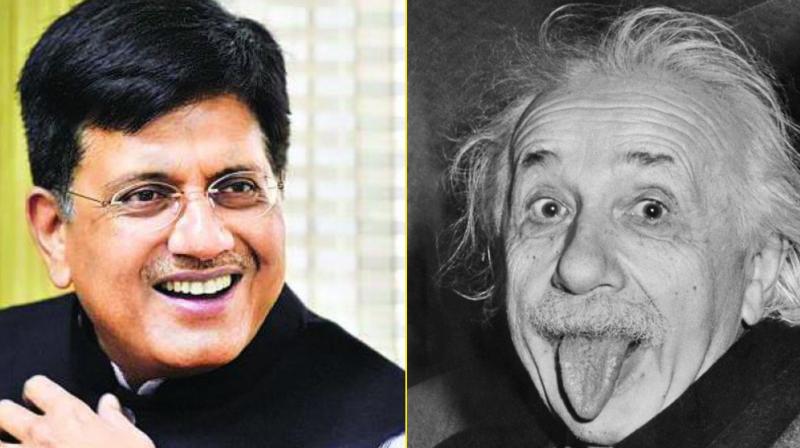 New Delhi: On Thursday, Union minister Piyush Goyal’s defence of the economy under Prime Minister Narendra Modi’s led to an inadvertent error on the “discovery” of gravity which set the social media buzzing. Later, Goyal said his remarks were taken out of context.

"If you're looking at a five trillion dollar economy, the country will have to grow at 12 per cent. Today it's growing at 6 per cent," he said.

"Don't get into those maths. Those maths have never helped Einstein discover gravity... If you'd only gone by structured formulae and what was past knowledge, I don't think there would have been any innovation in this world," he added.

Twitter promptly pointed out that it was Newton and not Einstein who discovered gravity and the names of both scientists shot up in the trending lists.

3. Gravity was discovered based on Mathematical work of laws of motion, not falling apple. pic.twitter.com/9Ydsw8FE2W

Stop mocking @PiyushGoyal ! It's a well known fact that maths didn't help Einstein to discover gravity. He discovered it when he saw Ola charges coming down after a surge.

If Einstein discovered gravity, what did Newton do? 🤔🤔🤔🤔🤔🤔

Yes, Mr. Minister. Einstein did not need maths to discover gravity since Newton already had. Now wait for HRD Minister to say that long before Newton our ancients knew all about gravity (or has he already?)

So yesterday the Finance Minister blamed millennials and today Piyush Goel says to leave maths out of the economy! God help us. #BoycottMillennials

Piyush Goel says that don't get into calculations about the economy. Don't get into maths. Maths never helped Einstein discover Gravity. Is this joke on economy

Piyush goel:Hold my beer
Economy slow down due to maths...

Why should Nirmala have all the fun? Piyush Goyal has just delivered a blockbuster dialogue

Millennials and Maths are the problem. Not Modi Govt. Understood? pic.twitter.com/JCoCIbdoxp

Reporter : Sir how India would become 5 trillion Economy in such growth rate?