Farmers have been struggling to get payments of the rice consignments after the imposition of trade sanctions on Iran. 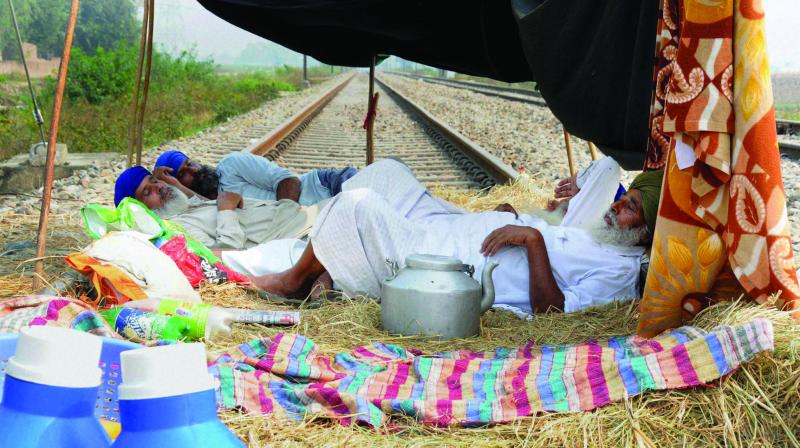 A file photo of protesting farmers resting under a tent on the rail tracks at Muchhal village near Amritsar. (Photo: PTI)

Premium Basmati farmers and traders of Punjab and Haryana are facing a lot of hardship. They have been struggling for long to get payments of the rice consignments after the imposition of trade sanctions on Iran. Now with the Basmati crop reaching the markets, the growers and traders are looking at bleak future as Iran is the biggest importer of high-quality Indian Basmati.

Earlier this year, there was some cheer among the growers due to increase in the export of Basmati.

However, the euphoria was short-lived as payments from Iran got delayed. According to some estimates, payment for 1 lakh tonne of Basmati worth Rs 1,000 crore has been delayed.

Perturbed over the issue, the exporters have sought intervention of the Central government into the issue.

According to Agricultural and Processed Foods Exports Development Authority, total Basmati exports from the country touched 8.64 lakh tonnes during April-May 2019 as compared to 7.45 lakh tonnes during the corresponding period previous fiscal. Out of this, Basmati exports to Iran were 3.33 lakh tonnes as compared to 2.41 lakh tonnes in 2018-19 during the same period. Iran has been a major market for Indian Basmati and accounted for around 34% of the country’s overall basmati exports during 2018-19. “The payment against Indian basmati shipments to Iran has got stuck at Iranian ports as the Government of Iran has stopped issuing Indian currency (at concessional rate) to Iranian rice importers without any prior notice. According to estimates, around 1 lakh tonne of basmati valued at around Rs 1,000 crore is lying at Iranian ports,” said Vinod Kumar Kaul, executive director, All India Rice Exporters Association. If the issue of delayed payment persists for a longer time, it might hit the earnings of farmers from the region as Punjab and Haryana account for over 70-75% of the total volume-wise exports. According to Mr Kaul, in the current scenario, the market has shown a price slump of around 15%, which will affect the remuneration to farmers once the new crop flows in. However, the woes of Basmati rice exporters of Punjab and Haryana aggravated.