India   All India  13 Sep 2020  Despite modern artillery, the yak remains the beast of burden for PLA
India, All India

Despite modern artillery, the yak remains the beast of burden for PLA 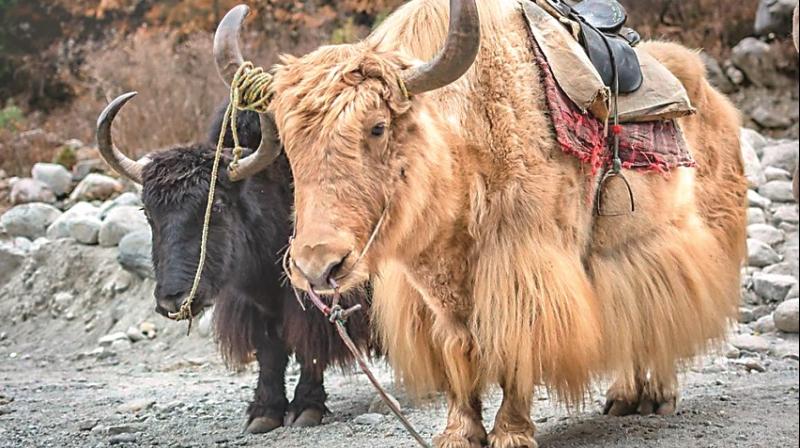 Hyderabad: The Line of Actual Control between India and China is crackling with the movement of modern artillery on both sides but neither side can do without a humble animal, the mule on the Indian side and the yak on the Chinese. It's a dependency that dates back decades, prior to even the 1962 war.

Sources acquainted with developments on the frontier say the People's Liberation Army (PLA) is heavily dependent on yaks. In fact, it has a dedicated yak unit that transports men and material through impenetrable mountain passes.

Just like the Indian Army is dependent on mules and ponies, Chinese troops cannot do without yaks and they keep ‘recruit’ the best breeds, which happen to be Tibetan.

It's a multipurpose animal for the PLA.  “PLA soldiers drink yak milk and eat yak butter, both highly nutritious. They are also cures for various ailments. Yak blood is high in protein and raw yak meat is highly nutritious,” a source said.

"Although the PLA soldiers kill and eat yaks, they do so mostly when an animal dies accidentally or is old and of no more use to them, though there have been instances where they have stolen yaks from local people in Tibet. They also use yaks for patrolling. PLA soldiers have survived on the mountains not due to their technological advancements but due to the yaks which even provide warmth to the soldiers who sleep beside them in harsh winter,” the sources said.

The PLA consider the yak to be a symbol of good luck, success and strength. According to feng shui, a traditional practice that originated in ancient China, a yak's head and tail symbolise good luck. The head symbolises strength.

What makes the yak an animal best suited to the mountains is its massive respiratory system. Its blood takes in more oxygen than other bovines enabling it to survive in the rarefied air. Yaks hardly sweat.

Old timers who served in the Indian Army say the PLA is so touchy about yaks that it will not hesitate to go to war over them.

“In fact a missing flock of 59 yaks and about 800 sheep triggered tensions between the two countries in 1965. It led to a border conflict in Sikkim in 1967. There were heated exchanges between soldiers over the yaks and sheep after the PLA accused Indian forces of stealing the animals from Tibetan herdsmen on the Sikkim border," a former army officer who worked on the LAC recalled.

Though there have been suspicions that the PLA sends yaks and sheep into Indian territory fitted with spying tools, the Indian Army, wary of the PLA's designs, has not found any concrete evidence of that.