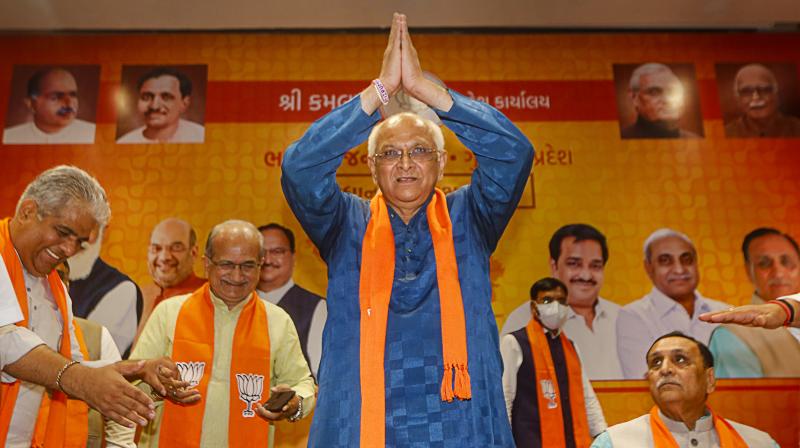 New Delhi/Ahmedabad: First-time legislator Bhupendra Rajnikant Patel, 59, on Monday took the oath as the 17th chief minister of Gujarat, where Assembly polls are due to be held by the end of next year. Belonging to the dominant Patidar community, Mr Patel’s administrative and organisational skills will be on test as the BJP -- both the organisation and the government -- prepares to embark on the electoral battle. As someone who never held the post of a minister, Mr Patel’s political astuteness will also be closely watched to see if he can effectively counter the Opposition’s attack, especially the charges of “anti-incumbency”.

Congratulating the new chief minister, Prime Minister Narendra Modi also praised his predecessor, Vijay Rupani, noting that during his term he had “undertaken many people-friendly measures… He worked tirelessly for all sections of society. I am certain he will continue to contribute to public service in the times to come”. Mr Patel is considered close to former CM Anandiben Patel, now governor of Uttar Pradesh.

Amid speculation that deputy chief minister Nitin Patel was miffed that he had been overlooked for the CM’s post, Mr Patel rejected such talk and said the BJP had “given him so much” and that he “was a seasoned politician, who had been teaching party cadres that they have to accept whatever the party decides for them”. He recounted his long association with the BJP and the various opportunities and responsibilities given to him and his stint in the teams of Narendra Modi and his successors. With both the new CM and Mr Patel belonging to the Kadva Patel community, speculation is rife that the deputy CM might not get the same designation in the new CM’s Cabinet.

Unanimously elected as the BJP legislature party leader on Sunday after Vijay Rupani’s sudden resignation, Mr Bhupendra Patel was sworn in as chief minister by the governor, Acharya Devvrat, at a simple ceremony in Gandhinagar. Union home minister Amit Shah and the chief ministers of some BJP-ruled states were among those present at the Raj Bhavan ceremony. Union minster and BJP state in-charge Bhupendra Yadav was also present.

As decided by the party, only Mr Patel took the oath and the council of ministers will take the oath in the next few days after their names are finalised. There is talk that some ministers in the previous Cabinet may not be included this time due to “non-performance”.

With the Assembly polls due in December 2022, the BJP is banking on the dominant Patel/Patidar community which has been supporting the party. In the 2017 Assembly elections, the BJP won 99 of the 182 seats while the Congress got 77.

The new CM, a civil engineer, is a trustee of Sardardham, the Patidar community organisation that hosted the programme in which Prime Minister Narendra Modi was the chief guest on Saturday. Born in Ahmedabad, Mr Patel is an MLA from Ghatlodia seat, that was earlier held by former CM Anandiben Patel. He won the seat by over 1.17 lakh votes in 2017, the highest margin in that poll. Ghatlodia is part of the Gandhinagar Lok Sabha constituency represented by Amit Shah. Mr Patel has served as Ahmedabad municipal councillor and as chairperson of the standing committee of the Ahmedabad Municipal Corporation and Ahmedabad Urban Development Authority. He is also a trustee at yet another Patidar organisation, Vishwa Umiya Foundation.

The Patidars are a dominant caste in Gujarat with a sizeable control over the electoral votes and dominate the political economy with a stronghold over the education, realty and cooperative sectors.

Mr Patel’s elevation -- he is the first from the Patidar sub-group to be made chief minister -- is key to the BJP’s plans to woo the Kadva Patidar community, which some political observers feel has drifted away from the party.

Gujarat BJP chief C.R. Patil said that Mr Patel’s work at the grassroots level, his hold on the cooperative sector, association with party workers and administrative abilities were among the several factors that led to his elevation as chief minister.