SI shot dead by militants in Jammu and Kashmir's Srinagar 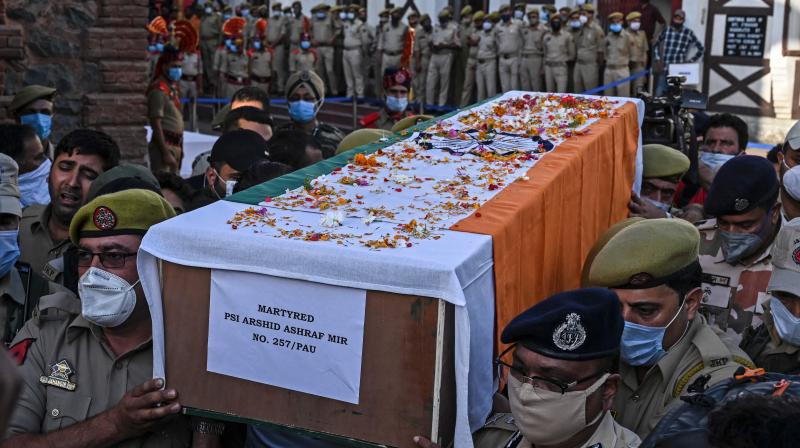 Police personnel carry the coffin of a police officer who died during an attack on Indian security personnel by suspected militants in downtown Srinagar, at the police headquarters in Srinagar on September 12, 2021. (TAUSEEF MUSTAFA / AFP)

Srinagar: A police sub-inspector was shot dead by suspected militants in Srinagar on Sunday afternoon, prompting the security forces to launch a search operation close to the shootout site to catch the assailants dead or alive.

The police and witnesses said that gunmen-possibly two in number- emerged from a dark alley and fired on a police (naka) party. The CCTV footage of the incident shows a militant shooting Arshid Ahmad at least twice from behind from point-blank range, they said. He succumbed to his injuries at Srinagar’s Sher-i-Kas-hmir Institute of Medical Sciences, the officials said. Medical superintendent Dr Farooq Jan said the cop sustained critical wounds and breathed his last “soon after doctors began attending on him”.

Reinforcements from J&K police and Central Reserve Police Force (CRPF) laid siege to a number of localities in Khanyar and began searches for the assailants.

J&K’s DGP Dilbag Singh said that the militants involved in the killing of the police official in Khanyar area have been identified.

Talking to reporters at the of wreath laying ceremony of the slain police official at Srinagar’s District Police Lines, he said that all the previous modules of militants involved in pistol shooting were wiped out, while it seems that a new group has been formed.

“I would not like to disclose about the outfit or module behind today's attack but the perpetrators have been identified and will be brought to justice soon,” he said.

He added that SI Arshid Ahmed was committed to his duties and his loss was a big loss to the police family.

Meanwhile, an encounter has been under way since Sunday morning between militants and security forces in  Upper Barote  area of Thanamandi area of J&K's frontier  Rajouri district.

The officials in Jammu said that the security forces including the Army and J&K police’s counterinsurgency Special Operations Group (SOG) had earlier launched a cordon and search operation in the upper reaches of Rajouri following information about the suspected movement of militants from across the Line of Control (LoC).

They said that the operation launched in the forest area of Barote Gali in Manjakote and parts of Thanamandi was going on and that all the exit points have been plugged to stop militants from escaping from the area.

The local sources said that the security forces have moved also in Dori Maal and some other villages of Rajouri to ensure militants who are believed to have sneaked into the district from across the LoC recently do not mingle with local population.