India   All India  13 Oct 2017  Will more people be targeted: Bombay HC on murder of Lankesh, liberals
India, All India

Will more people be targeted: Bombay HC on murder of Lankesh, liberals

The bench asked the investigating agencies to change their line of probe and adopt technology to nab the killers. 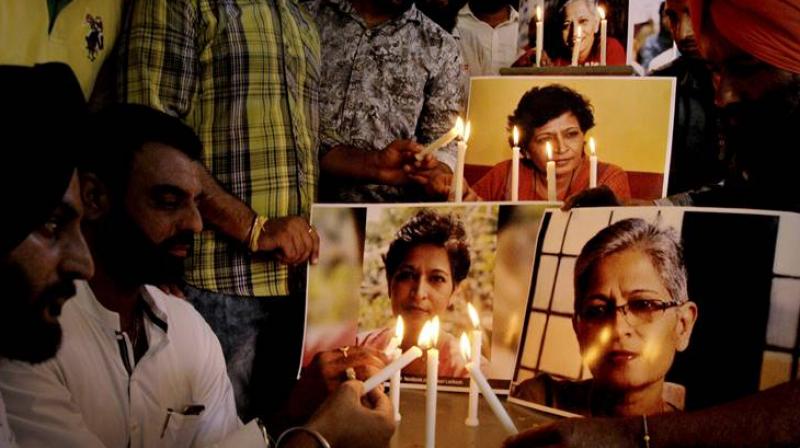 Gauri Lankesh was shot dead on September 5 on the doorstep of her house in Bengaluru. (Photo: PTI/File)

Mumbai: The “trend of killing all opposition” in India is “dangerous”, the Bombay High Court said on Thursday while referring to the murder of journalist Gauri Lankesh, and rationalists Narendra Dabholkar and Govind Pansare.

The remark was made by Justices SC Dharmadhikari and Vibha Kankanvadi, who were hearing petitions filed by Dabholkar and Pansare’s relatives, requesting the court to monitor the investigations into their murders, according to a report by The Indian Express.

“Will more people be targeted? There is no respect for liberal values and opinions. People are increasingly being targeted for their liberal principles… Not just thinkers, but any person or organisation that believes in liberal principles can be targeted. It’s like if there is some opposition to me, I must have that person eliminated,” said Justice Dharmadhikari.

“This trend of killing all opposition is dangerous. This is giving a bad reputation to the country,” the high court bench said as the CBI and Maharashtra CID submitted their probe reports in the Dabholkar and Pansare’s murder cases.

“While your efforts are genuine, the fact remains that the prime accused are still absconding,” said the court. “Between every adjournment, more precious lives seem to be lost…(a) like-minded person has been killed in Bangalore,” the bench added.

The bench asked the investigating agencies to change their line of probe and adopt technology to nab the killers.

“If the accused persons and organisations are feeling emboldened, then the probe agencies should take that as a challenge,” it said.