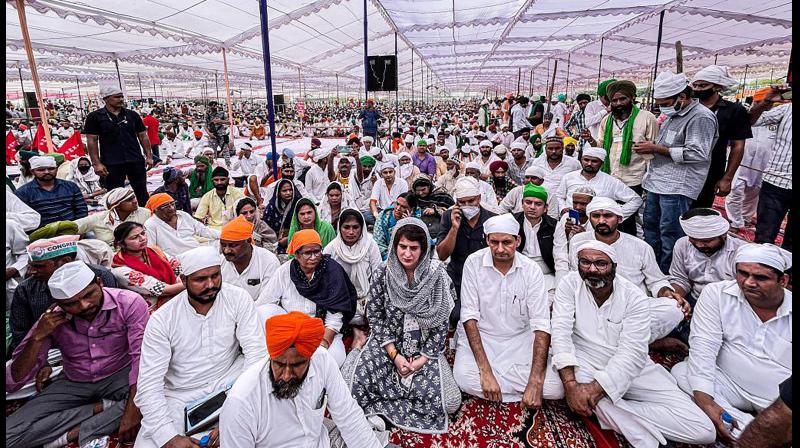 farmers from Punjab, Haryana, Uttarakhand and other parts of UP came together for the 'antim ardas (last pray-ers)' in honour of four farmers and a journalist who were among eight persons killed in the recent violence. (PTI)

NEW DELHI/LUCKNOW: Thousands of farmers from Punjab, Haryana, Uttarakhand and other parts of UP streamed into Lakhimpur Kheri  on Tuesday for the “antim ardas (last pray-ers)” in honour of four farmers and a journalist who were among eight persons killed in the recent violence.

Security was heightened in the district where AICC general secretary Priyanka Gandhi Vadra and Rashtriya Lok Dal chief Jayant Chaudhary were among those who attended the event.

No political leader was allowed to share the stage. On the stage set up at the sprawling ground, family members of deceased farmer Daljeet Singh and Gurvinder Singh of Bahraich district, Nachhatar Singh and Lavpreet Singh of Kheri district, brother and daughter of deceased journalist Raman Kashyap of Nighasan (Kheri) sat holding photographs of the deceased persons.

A high-voltage drama was witnessed at the Bareilly airport where Mr Chaudhary was stopped briefly by police personnel before he was allowed to go to Lakhimpur Kheri. RLD workers sat on a dharna outside the airport as soon as the news reached them and they tried to block the road, but were pacified by police officials. Additional district magistrate Mahendra Kumar Singh said Mr Chaudhary was stopped for about 45 minutes at the airport due to ‘unavoidable reasons’.

On the investigation front, the UP Police has made one more arrest in the violence case. Shekhar Bharti, the driver of Ankit Das, who is also implicated in the case, was arrested and remanded to 14-day judicial custody by a court. Mr Das along with another accused, Latif, have filed surrender applications in the court of the chief judicial magistrate.

With Shekhar’s arrest, the police has so far arrested four people. Union minister Ajay Mishra’s son Ashish, who is accused of killing the farmers by mowing them down in an SUV, was on Tuesday taken to the crime branch office by the UP police for interrogation. This comes a day after the court sent him to three-day police custody. It was after 12 hours of questioning that Ashish was arrested and later sent to judicial custody.

Ashish was named in an FIR following allegations that he was in one of the vehicles that mowed down four farmers protesting over UP deputy chief Minister Keshav Prasad Maurya’s visit on October 3. Besides, four farmers, two BJP workers and their driver were allegedly lynched by angry farmers in the incident. Local journalist Raman Kashyap also died in the violence.

Aged around 35, Ashish alias Monu looks after the political activities of his father in his Kheri parliamentary constituency and was also vying for a party ticket from Nighasan seat to contest the Assembly polls.