Multiple factors including demonetisation and action against top militant commanders are responsible for this. 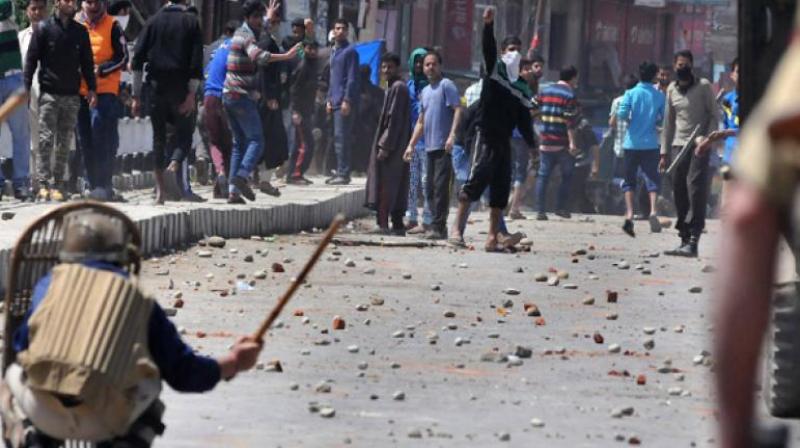 The Director General of Police said it was normal to witness 40-50 incidents of stone-pelting in a day last year. (Representational Image)

Jammu: Jammu and Kashmir Police chief S P Vaid has said that there has been a 90 per cent dip in incidents of stone-pelting in Kashmir Valley this year as compared to the last year and credited the people of Kashmir for the improvement in the situation.

NIA raids, he said, were not alone responsible for the change in situation in the Kashmir Valley and maintained there were multiple factors at play including demonetisation and action against top militant commanders.

The Director General of Police said it was normal to witness 40-50 incidents of stone-pelting in a day last year.

"(There is) a more than 90% fall in stone pelting in Kashmir Valley (this year) as compared to the last year.It is a huge decrease", Vaid said.

"There are weeks when there is not even a single case of stone pelting while in a day (last year) there used to be more than 50 incidents taking place. There is a huge change in the mood of people", he said.

"It is a huge change. Law and order situation in Kashmir is for everybody to see, particularly those living in Kashmir or those dealing with it.

"Even on Friday, where it used to be normal to have 40-50 incidents of stone pelting in a day (last year), not even a single incident is taking place (this year)", the DGP said.

Vaid said NIA raids were not alone responsible for a drop in stone-pelting incidents.

"There are many factors responsible for improvement in the law and order situation and decrease in stone pelting. The impression that NIA raids have only improved the situation...I would not agree to it", DGP said.

"Of course, that (NIA raids) helped, but the main credit goes to the people of Kashmir, probably they have also realised the futility of this and damaging their own property and targeting police which also belongs to their own society besides the fatigue factor and action against top commanders", he said.

The police chief said there has been an improvement of the situation in Kashmir due to demonetisation, arrest of terror supporters and increase in political activity.

"At many places, it was militancy driven. Besides the role of demonetisation and many other factors, including the administrative action against instigators and slapping cases against those who were involved in sabotage peace has also contributed to it.

"There was no single factor responsible but all of them were instrumental in (in dip in stone-pelting and improvement in situation in Kashmir)", he added.

Apart from these, detention under the Public Safety Act also helped, he said.

"I will also give credit to resumption of political activity. Slowly political activity has picked up and that also played its role. After all political people are also playing a positive role. All these things contributed to the improvement in the situation", he added.

Asked whether the change in situation has been brought about due to the "iron fist in velvet glove" policy, he said "Yes".

The police chief said there has been a tremendous success as far as "operation allout" is concern.

"The credit goes to officers and jawans who were working in the fields. There is very good coordination among police, Army and other security agencies", he said.

He, however, said that a new phenomena of suicide attacks by JeM has been observed.

"We have eliminated nine militants of them, three in Pulwama, three in BSF camp attack in Srinagar and three only yesterday," Vaid said.