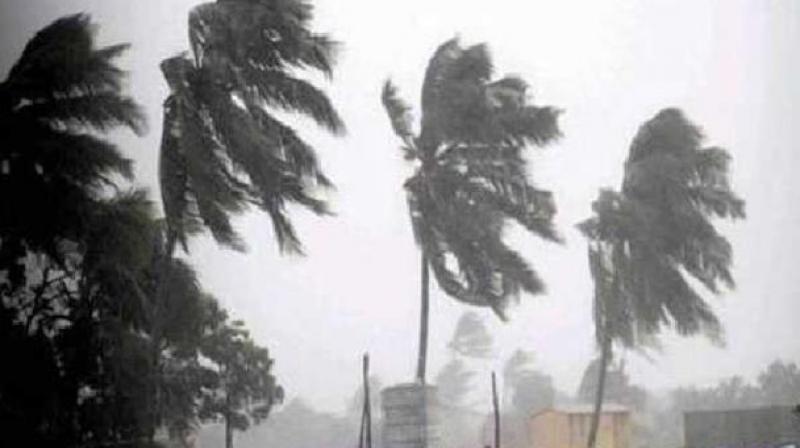 The cyclone lay about 720 km east northeast of Chennai over the Bay on Monday and it is very likely to move west southwestwards and intensify further into a severe cyclonic storm by Tuesday. (Representational Image | PIB)

Chennai: Cyclonic storm Gaja will cross Tamil Nadu coast between Cuddalore and Pamban on November 15, bringing heavy rainfall coupled with gale wind, the Met office said on Monday as the state government put its machinery on alert and kept on standby 30,500 rescue personnel.

Neighbouring union territory of Puducherry, which is also covered by the cyclone alert, said it is on high alert as well and precautionary steps are being taken to meet the situation.

The cyclone lay about 720 km east northeast of Chennai over the Bay on Monday and it is very likely to move west southwestwards and intensify further into a severe cyclonic storm by Tuesday, the IMD said in its latest bulletin.

Tamil Nadu Chief Minsiter K Palaniswami chaired a high-level meeting at the Secretariat of Ministers and top officials to review the preparedness in the wake of the storm and forecast of heavy rainfall.

Revenue Minsiter RB Udaya Kumar said 30,500 rescue personnel were on standby while arrangements had been made for food and shelter at relief centres for those in low lying areas.

Across the state, a total of 4,399 locations have been identified as vulnerable and teams have been deployed for rescue, he told reporters.

Also, teams of the National and State Disaster Response Forces are ready for deployment.

Vigil has been mounted in coastal districts and meetings have been held to review preparedness, he said.

Coastal and vulnerable districts including Cuddalore and Nagapattinam have been advised high alert, Udaya Kumar said.

The IMD said the system was likely to weaken gradually and cross Tamil Nadu coast between Cuddalore and Pamban as a cyclonic storm on November 15 forenoon.

It forecast rainfall at most places in Tamil Nadu on November 14 and extremely heavy (over 20 cm) in isolated places in northern parts of the state the next day.

It also advised fishermen not to venture into sea whose condition will be rough to very rough from Tuesday morning while the wind speed is expected to up further touching 110 kmph.

Storm surge of height of about 1.0 meter is very likely to inundate low lying areas of Nagappattinam, Thanjavur, Pudukkottai and Ramanathapuram districts of Tamil Nadu and Karaikal district of Puducherry at the time of landfall.

The IMD also warned of major damage to thatched huts and houses. "Roof tops may blow off ...damage to power and communication lines," it said adding standing crops could also be hit and cautioned sea water intrusion in low lying areas.

Citing the IMD forecast of heavy rains, the Central Water Commission issued an advisory to Tamil Nadu and Kerala authorities to maintain strict vigil at various dams which come under the "cyclone field" and are already 80 per cent to 91 per cent full.

Services of NDRF personnel will be requisitioned if warranted, he said after a review meeting with top officials.

Banners, billboards should be removed considering safety, he said.

The Minister appealed to people to not trust fake information on social media.