Kumar was a six-time member of Parliament from Bangalore South, a constituency that remained his bastion till the very end. 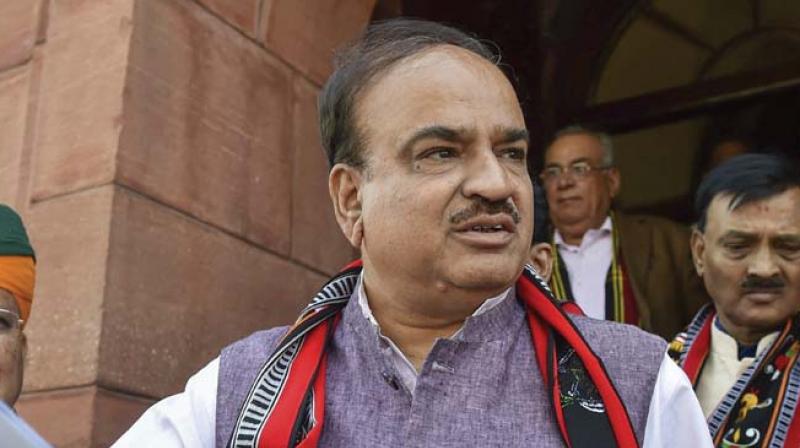 Bengaluru: A staunch RSS idealogue and long-time BJP member, Union minister Ananth Kumar was the quintessential organisation man who kept Karnataka and the party as the twin focuses of his career.

The parliamentary affairs minister, who passed away early Monday after battling lung cancer for several months at the age of 59, was the first person to speak in Kannada in the UN in October 2012 and was often regarded as the Delhi face of the Karnataka BJP.

Kumar was a six-time member of Parliament  from Bangalore South, a constituency that remained his bastion till the very end.

Bengaluru’s “most loved” gregarious MP was known for his political adroitness, managing to be in the inner circle of the central leadership of the BJP — be it during the heyday of Atal Bihari Vajpayee or Narendra Modi now.

He was born to a middle class Brahmin family on July 22, 1959, in Bengaluru to Narayan Shastri, a railway employee, and Girija N. Shastry. His early education began under the guidance of his mother who herself was a graduate.

A graduate in Arts and Law, Kumar’s journey in public life began due to his association with the ABVP, a student organisation of the Sangh Pariwar, which he served in various capacities, including state secretary and national secretary.

The strong political instinct was honed early on. Kumar voiced his protest against the then Indira Gandhi government’s imposition of Emergency for which he was sent to jail for about 30 days. With his steady political growth, his bond with the Sangh, where he was mentored politically, also grew stronger.

Looking to get into mainstream politics, Kumar joined the BJP in 1987, going on to take up the responsibilities of state secretary, state president of the Yuva Morcha, general secretary and national secretary.