MoS Home Kiren Rijiju has rejected the allegations, saying those who make false claims would be 'beaten up with shoes'. 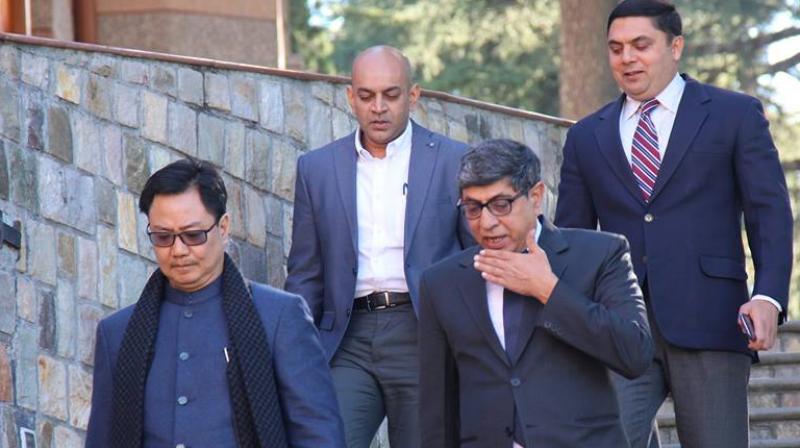 New Delhi: Union Minister of State for Home Kiren Rijiju on Tuesday came under attack over allegations that he influenced Power Ministry to clear bills related to a power project in Arunachal Pradesh, with Congress demanding his sacking but the minister denied any wrongdoing.

Alleging that it was a Rs 450-crore scam in the form of false and inflated transportation bills, Congress chief spokesperson Randeep Surjewala released an audio tape of a purported conversation of the minister's cousin, a contractor in the 600 MW power project, and Rijiju's letter recommending that held up payments be released.

"Kiren Rijiju has no right to stay in office. He should either be dismissed by the Prime Minister or asked to resign till an independent probe is complete," the Cogress spokesman said.

The Opposition party also targeted Prime Minister Narendra Modi saying his "tall claims" of bringing transparency have "fallen flat" as had happened with several other scandals in the past including Vyapam, Lalitgate and the Vijay Mallya issue.

"Mr Modi's claims of transparency ad honesty is now under question. People of India are looking at what action he takes on this issue," Surjewala said.

Hitting back, Rijiju, who is Minister of State for Home, said, "I have written the letter to the Power Minister after I received representations from some people in my constituency in Arunachal West regarding pending bills. I have done no wrong and there is no corruption."

Peeved at the allegations, the Minister said, "Those who planted the story will be beaten up with shoes when they will come to our area."

Rijiju also tweeted copies of the representation he received and the letter he had sent to the Power Minister.

"Really cheap!...  Is it a corruption helping poor Tribals," he said on twitter.

Stating that the contracts were given and most of the payments made during the Congress rule, he asked the opposition party to apologise.

Reports claimed that Rijiju, his cousin, a contractor in Arunachal Pradesh, Goboi Rijiju, and several top officials of the state-run NEEPCO, including its Chairman and Managing

Director, have been named in a 129-page report by the PSU's Chief Vigilance Officer Satish Verma that alleges corruption in construction of two dams for 600 MW Kameng Hydro Electric Project, one of the biggest hydro-electric projects in

"I pity Congress party ... I feel that Congress should apologise to the nation for creating an issue which is non-existent. If local people have approached me to tell me that bills are pending and the bills are of small amount and what they are saying of Rs 150 crores, it is not like that," Rijiju said.

"Small pending bills, pending since 2012, 2013, 2014 before we came to power, the contracts were awarded when we were not in the government, the payments were paid when we were not in the government. Only I was told that some 20-30 per cent of payments were remaining which NEEPCO is not releasing the money. So I wrote a letter to the Power Minister that just look into the matter, thats it," the Minister said.

Verma's report was sent to the CBI, CVC and the Ministry of Power in July this year. It alleges an "elaborate conspiracy" involving contractors, North East Power

Corporation (NEPCO) officials and the West Kameng district administration to defraud NEEPCO and the government of funds that "may extend up to Rs 450 crore".

West Kameng, the site of the project, falls in Arunachal West which is the parliamentary constituency of Rijiju.

The CBI has made two "surprise checks" but no FIR has been registered yet, reports said.

Chief Vigilance Officer Satish Verma, a Gujarat IPS officer, was pulled up by NEEPCO for "unauthorised absence," and transferred to the CRPF in Tripura soon after his report.

Verma was also part of the three-member SIT set up to probe the alleged fake encounter of Ishrat Jahan in Gujarat in 2004 when Narendra Modi was the Chief Minister.

Verma had said Ishrat's killing was a "premeditated murder".

Surjewala said, "This is a very serious issue. The Prime Minister should speak out on this issue....

"If PM has courage of conviction, he must either sack Kiren Rijiju or ask him to resign and conduct a fair and free probe so that truth comes out...Till then, Rijiju should be divested of his post."

"The Prime in the run up to elections used to say that he will neither do or allow corruption to happen. But there have been a series of charges of corruption that came to light in the Modi government," he said.

Payments were stopped after a letter by the Chief Vigilance Officer conducted a probe into the issue, he claimed.

Targeting the CBI, Surjewala alleged that the premier investigation agency has become a "puppet" in the hands of the Modi government and has not even registered an FIR in the matter despite the report by the vigilance officer.

Surjewala also played out a purported audio conversation between Goboi and Verma and the opposition party claimed it also had a mention of the goings on that led to pulling down of the Congress government in Arunachal Pradesh.

He claimed Rijiju's relative was clearly attempting to influence the CVO in the 28-minute tape and was using his Minister brother's name to seek his help in getting the bills cleared and was also enticing him with a promotion.

Alleging that "inflated" bills were put up for bringing boulders for the dam construction, he said some of the huge boulders were shown to be carried on scooters, motorcyles and cars by a single driver at the same time.

Meanwhile, rejecting graft charges against Kiren Rijiju as "baseless", BJP on Tuesday said Congress was trying to blame the Union Minister for its "sins" as it was in power at the Centre as well as in Arunachal Pradesh when the project under question was sanctioned.

The party said Congress and its "friend", a reference to the vigilance officer who has flagged the alleged corruption involving Rijiju, had conspired to smear its name as the Opposition party had not been able to find a single case of corruption in its two-and-a-half years of rule at the Centre.

BJP National Secretary Shrikant Sharma also insisted that the contractor, who is at the centre of allegations, is not Rijiju's cousin as alleged.

"It is a completely baseless charge. Congress and its friends have hatched a conspiracy to target BJP as they have not been able to find a single case of corruption against our government. "The said project was sanctioned in 2005 when Congress was in power at the Centre as well as in the state," he said.

The letter written by Rijiju to Power Minister Piyush Goyal was meant to help subcontractors involved in the project as their dues were not cleared, Sharma said.