India   All India  13 Dec 2016  PM to be present in Parliament in last 3 days of Winter Session: Naidu
India, All India

PM to be present in Parliament in last 3 days of Winter Session: Naidu

Naidu's remarks come in the background of Opposition's demand for Modi's presence in the House during the debate on demonetisation. 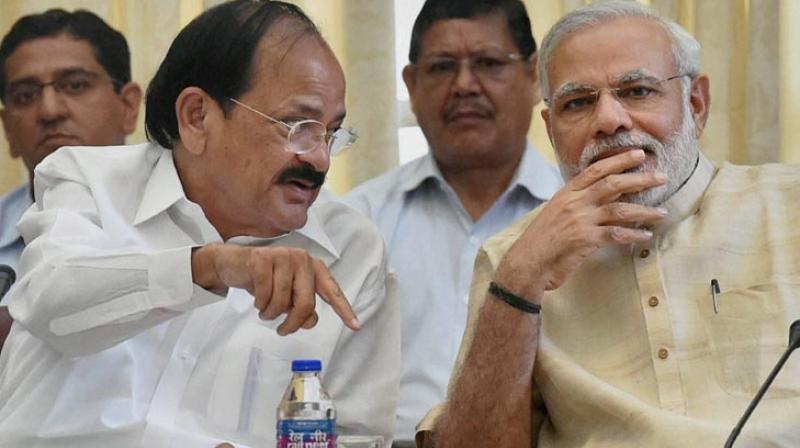 New Delhi: Union Minister M Venkaiah Naidu on Tuesday said Prime Minister Narendra Modi will be present in Parliament for the remaining three days of the winter session and accused the Opposition of "changing goalpost" to disrupt functioning of both the Houses.

"The Prime Minister, except when he was out, is in Parliament every day. He is the first man to come to the Parliament and the last man to go. He is sitting in his room and watching all that is happening. As and when there is a request, he comes to the House," Naidu said.

When asked specifically if the Prime Minister will be present in Parliament for the next three days, he said," He will be."

Naidu's remarks come in the background of Opposition's demand for Modi's presence in the House during the debate on demonetisation and discussion under a rule which entails voting.

The winter session of the Parliament has witnessed almost complete washout since it began on November 16. It will resume tomorrow and conclude on December 16.

Stressing that the government wants to have a debate on the demonetisation issue, Naidu accused the Opposition of "changing goalpost", saying the Speaker had allowed the discussion under rule 193 and now it is being disrupted by the Congress-led Opposition.

After the discussion started, the Opposition realised that they "don't have anything to say" and suddenly started demanding that Prime Minister be present in the House.

"You want Prime Minister to come to House and listen to all the abuses. Who are they (Opposition) to decide and dictate. There is rule 193 and the speaker has already accepted (a debate under it)," he said.