‘Planets line up in right positions’: KCR to take oath as CM at 1.25 pm today

Only a couple of ministers will be sworn-in with Rao, while the rest will take their oaths five days later. 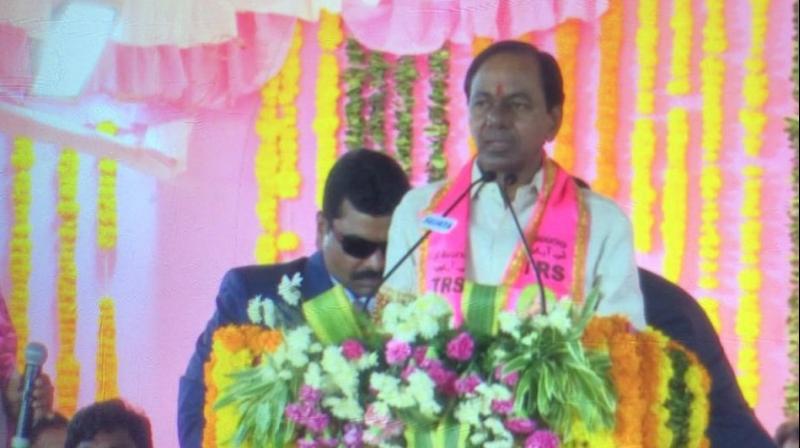 He also claimed that TRS is the first party to fulfil all the promises made in their manifesto. (Photo: File)

Hyderabad: As Telangana Rashtra Samithi (TRS) president K Chandrashekar Rao is known for his belief in religious customs, traditions and rituals, TRS chief has chosen the best “muhurtam” to take oath as the chief minister of Telangana for the second successive term on Thursday.

According to an official communique from the state government, KCR will be sworn in as the chief minister exactly at 1.25 pm, as per the muhurtam fixed by the Vedic pundits from Lord Lakshminarasimha Swamy temple at Yadagiri in Bhongir district, a famous pilgrim centre in Telangana.

Only a couple of ministers will be sworn-in with Rao, while the rest will take their oaths five days later.

Addressing the media on Wednesday, the TRS Chief also made his national ambitions clear and gave a roadmap for a non-Congress, Non-BJP third front.

"Rythu Bandhu scheme will be implemented in the whole country, after forming the third front. He also said that he is aware of all the budget details which are required to implement the Rythu Bandhu Scheme. There is no proper water system for farmers in the country," he said while sharing his vision for the national politics.

He also claimed that TRS is the first party to fulfil all the promises made in their manifesto.

"The people of Telangana are positive towards TRS as the party has fought for the separation of state and the schemes that TRS has implemented in these years are unique," he added.

Asserting that child marriages have been stopped in the state by the Kalyana Laxmi Scheme, KCR also outlined the growth of the state and said, "Telangana has witnessed 29.90 per cent economic growth in this year. No other state has more economic growth than Telangana. By 2024 the Telangana state expenditure will be 10 Lakh Crores. Within one and a half year, Sitaram project will be finished completely and 70 per cent of Palamuru project will also be completed."

He also criticised the Congress for not doing enough on the employment front and said, "Congress party says that they are a national party but there will be different policies implemented in each and every state. How many government jobs are given to the unemployed by the Congress party in 60 years? Three lakhs people are working in government sectors and 30,000 lakhs are working in private sectors."

"Telangana has sufficient income and revenue in the state. There will be no need for collecting extra taxes. The TRS ministers who lost in the election will not be given a chance in the cabinet this time," KCR said.

He also affirmed that the TRS government will give houses to the journalists in the state.

KCR had sent his resignation to the governor on Wednesday.