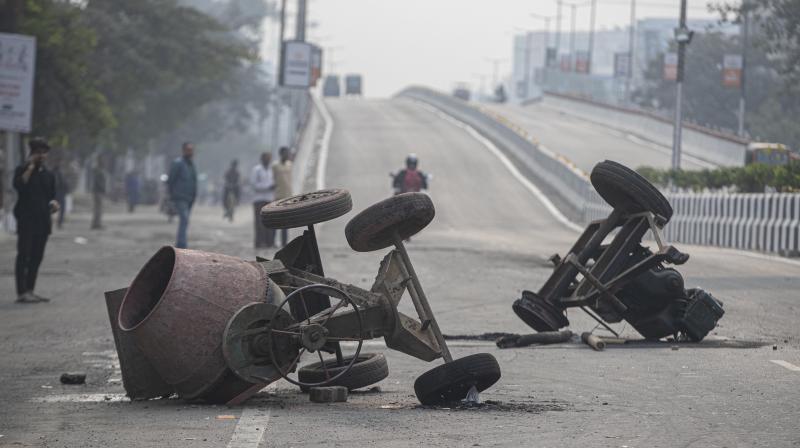 As protesters attacked government and other properties, police opened fire in which at least two protestors were killed and three others grievously injuried in Lalung Gaon area of Guwahati. (Photo: AP)

Guwahati: Two people were shot dead in police firing as Assam, the hotbed of anti-CAB protests, plunged into chaos on Thursday with thousands of agitators descending on streets defying curfew, thumbing their nose at Army contingents staging flag marches.

Protestors attacked the office of Bangladesh high commission in Guwahati and targeted the homes of AGP and BJP legislators in their respective constituencies, security sources said, adding that the lone AGP Rajya Sabha member, Birendra Pd Baishya, was also attacked. Protestors were angry as Mr Baishya had voted in favour of the Citizenship (Amendment) Bill in Parliament.

Centre has rushed 20 additional companies of paramilitary forces who will be joining duty from Friday. Despite PM Narendra Modi’s assurance to safeguard the political, linguistic, cultural and land rights of Assamese, thousands of protesters took to the streets defying curfew in Guwahati, which has turned into a garrison town with the Army, paramilitary and state police personnel present
in every nook and corner.

As protesters attacked government and other properties, police opened fire in which at least two protestors were killed and three others grievously injuried in Lalung Gaon area of Guwahati.

As violence continued even after sunset on Thursday, several incidents of police firing were reported from many places in Guwahati, including Hatigaon, Lachitnagar, Bashishta, Downtown, Ganeshguri and Lalungaon.

Security sources said that police resorted to firing on protestors in at least seven places in late evening. Though the exact number of injured was not known immediately, several have been shifted to hospitals with grievous injuries.

Many towns and cities were placed under indefinite curfew, including Guwahati, the epicentre of protests, besides Dibrugarh, Tezpur and Dhekiajuli. Night curfew was imposed in Jorhat, Golaghat, Tinsukia and Charaideo districts, officials said.

Internet services in 10 districts were suspended for another 48 hours beginning 12 pm to prevent “misuse” of social media to disturb peace and tranquility, and to maintain law and order, officials said.

Mobile internet and messaging services were also suspended in neighbouring Meghalaya for 48 hours since 5 pm on Thursday after incidents of vandalisation of vehicles.

The unprecedented anger against the CAB has caught the state administration and intelligence agencies off guard. State police force too seems unequipped as protestors have gone all out to target government properties and laid a siege to most of the highways in at least 12 districts of Brahmaputra valley.

Bogged down by complete lawlessness and failure of police in enforcing the curfew, Assam chief minister Sarbananda Sonowal, who is also the home minister, on Thursday transferred the additional director general of police Mukesh Agarwal and posted NIA IGP G.P. Singh as the new ADGP, law and order. Mr Singh, who arrived here on Thursday in a special aircraft from New Delhi with a senior IB officer, has taken charge.

Police said that one Abdul Ali, from Assam’s Barpeta district, died in police firing in Lalung Gaon area where protestors tried to attack a convoy escorting a delegation of foreigners. Police said that protestors resorted to stone pelting despite repeated warnings, and so, in order to protect the foreigners, their escort team opened fire.

To enforce curfew and disperse protestors resorting to arson, police opened fire at several places in the capital city after sunset. Security sources said that a protestor, Dipankar Das, sustained bullet injury in Lachit Nagar area of the city. He was rushed to Guwahati Medical College Hospital where he was declared brought dead. Diapankar, from Chaygaon area, was working in a canteen. He was the part of a crowd resorting to arson and stone pelting on police vehicles.

Informing that ministry of home affairs was keeping a close watch on the state, security sources said there’s an urgent need to mobilise paramilitary forces from neighbouring states as Army soldiers are not trained to control crowds and such protests. Security sources also suspect the involvement of some “external as well as political forces” who they say may be financing and provoking the protestors to violence.

Defying curfew, protestors gathered at Latsil playground where all the anti-CAB leaders, led by Aasu chief adviser Sammujjal Bhattacharya and noted singer Zubeen Garg, addressed the huge crowd and reiterated that they will continue their democratic movement against the CAB. The Aasu and Shilpi Samaj (Artist Association) have called for another 11-hour long sit-in protest in Guwahati’s Chandmari area on Friday.

Asserting that it was because of peoples’ power that the state administration had failed to stop them from holding meetings despite curfew, Mr Bhattacharya warned the government to refrain from trying to suppress their movement with security forces. He also regretted that even after such massive protests, chief minister Sonowal continued to propagate that CAB was not going to harm the interests of Assamese people.

Clause 6 reads, thus: “Constitutional, legislative and administrative safeguards, as may be appropriate, shall be provided to protect, preserve and promote the cultural, social, linguistic identity and heritage of the Assamese people,”

The chief minister also reiterated that the government was waiting for the report of Justice Biplab Sarma committee on Clause 6. “As soon as the committee submits the report, our government at centra as well as state is committed to implement the recommendation of the committee,” he said.

Local train services in Tripura and Assam have been suspended, leaving many people stranded in these two states that anyway have limited connectivity with the rest of the country. Many passengers are stranded in Kamakhya and Guwahati. Several airlines have also cancelled their flights to Assam.

The government on Thursday also issued an advisory to private television channels to be extra cautious about airing content that is likely to incite violence. The advisory has been issued as a caution against showing the violent protests in Northeast.

The Centre has rushed five columns of Army troops to Assam while three columns of Assam Rifles troops have been deployed in Tripura. The Army conducted flag marches in Guwahati on Thursday morning as the city braced for another round of fierce protests.

PM Modi also tried to reassure the people of Northeast that the CAB won’t affect the spirit and nature of the region. He said, “There are attempts to fuel tensions in Northeast, don’t be misled by Congress. The traditions, culture, language etc of Assam and other states won’t be affected.” However, Congress reminded PM Modi that the Internet is suspended in the region and they won’t be able to receive his message.