The Punjab Congress president once again urged the people to vent their frustration and anger against the Akalis through the ballot. 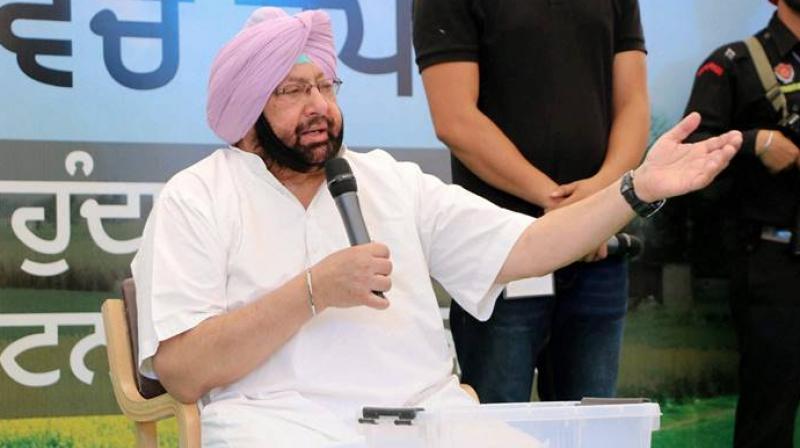 Amritsar: Punjab Congress president Captain Amarinder Singh on Saturday stated that he has sought the party high command's permission to fight the coming assembly elections from Parkash Singh Badal's constituency of Lambi, to ensure the total defeat of the Akali leadership in Punjab.

The Punjab Pradesh Congress Committee (PPCC) president said he wanted to fight the Chief Minister on his home turf of Lambi, as he wanted to defeat all the top Akali leaders responsible for destroying the state through their drugs, mafia and goonda raj, and guilty of ruining its trade, industry and agriculture.

Captain Amarinder said he had requested the Congress high command to allow him to fight the Assembly polls from Lambi so that he could free Punjab from the vicious and destructive rule of the Badals.

Responding to a question, he said he would fight both Lambi and Patiala, if permitted by the Congress high command.

The entire state is in shambles, said Captain Amarinder, lambasting Badal as well as his family and associates, as he also cited the example of the Nabha jail break to point out how goondas were being allowed a free run of the state to help the Akalis during the polls.

Captain Amarinder assured the people of the state that his government would open a probe into all Akali scams and punish every person found guilty of any criminal deed, especially drug trade.

Reiterating his opposition to use of violence against the Badals, he once again urged the people to vent their frustration and anger against the Akalis through the ballot.

The PPCC president also assured that the three schemes he had launched for the welfare of the people would be strictly implemented and he would fulfill every single promise made to the state, including waiver of farm loans, one job in each household and mobile phones to youth to connect them with the world.

He said his government would renegotiate the interest rates on farm loans and settle them in such a way that the burdened farmers do not have to pay a single penny from their pockets.

Asserting that the Congress was totally committed to the state's welfare, Captain Amarinder pointed out that he himself had resigned his Lok Sabha membership for the cause of Punjab's water.

Commenting on the current row over the Khadi icon, the PPCC chief said the nation would never allow Mahatma Gandhi's picture on the Indian currency notes to be replaced with that of Prime Pinister Narendra Modi and any suggestion to this effect was a sign of sycophancy.