Dr Sivan, who will occupy the top office for three years, said the announcement about his appoint came a surprise. 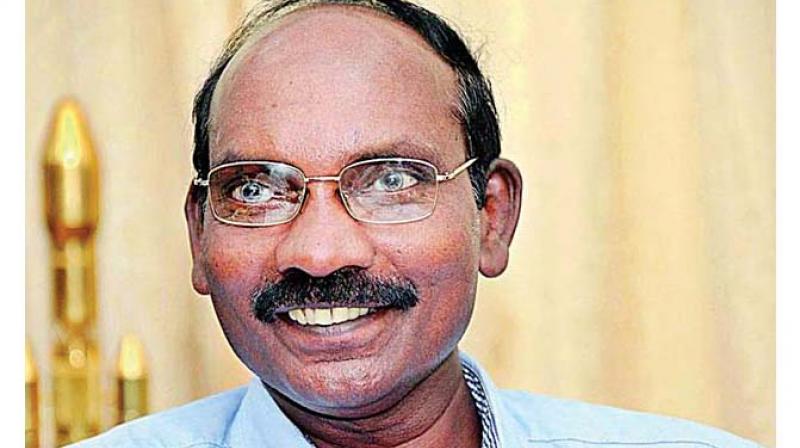 Bengaluru: A bounty of new services and applications for the common man figures at the top of the list of must-do tasks of Dr Kailasavadivoo Sivan, when he assumes office as chairman, Indian Space Research Organisation (Isro) here on Monday.

These benefits will be handed to people through advanced and high performance satellites in the near future, he told Deccan Chronicle, adding that rocketry, his field of expertise, would figure lower down in the list of priorities. And, all advan-ced technologies envisaged would be built into both communications and remote sensing satellites being designed and manufactured for launch this year and later, he added.

He said the launch of India’s second probe at the moon, Chandrayaan-II in the first half of 2018, and developmental flight of heavy-lift Geosynchronous Satellite Launch Vehicle (GSLV-MK3) in April, are the two most challenging missions this year.

“We will declare GSLV-MK3 as operational after two successful developmental flights. We will also focus on reduction in cost of satellites, and follow the road map for designing bigger launch vehicles. We are carrying out more tests of systems and components before the next flight of the Reusable Launch Vehicle (RLV). At the same time, the concept of two-stage-to-orbit (TSTO) for designing new launch vehicles have been discussed at le-ngth, and we are likely to take a decision in the mo-nths to come,” he added.

Dr Sivan said work is apace on development of semi-cryogenic rocket engine with tests of sub-systems and the hardware required for this unique concept of powering rockets.

“It is difficult to specify a timeline for the semi-cryogenic engine as all sub-systems must be tested extensively before integration,” he added. Dr Sivan, who will occupy the top office for three years, said the announcement about his appoint came a surprise.

He joined Isro in PSLV Project and has contribu-ted towards end to end mission planning, mission design, mission integration and analysis. The mi-ssion design process and innovative mission design strategies perfected for PSLV have become critical for launch vehicles like the Geosynchronous Satel-lite Launch Vehicle, GSLV-MK3, and Technology De-monstrator of Resuable Launch Vehicle, the Indi-an version of the US Space Shuttle.