India   All India  14 Jan 2019  Bridging gender gap in politics: India lagging behind the rest of South Asia
India, All India

Bridging gender gap in politics: India lagging behind the rest of South Asia

Nepal also has a policy of 33 per cent reservation for women in all state institutions, including the national legislature. 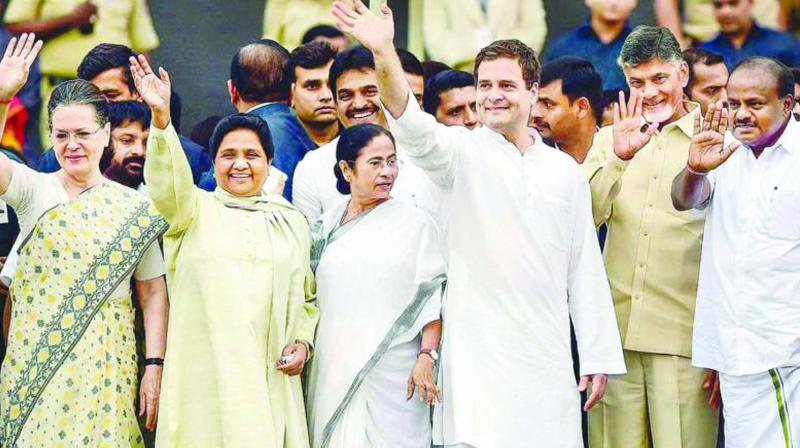 A file photo of Sonia Gandhi, Mayawati and Mamata Banerjee with Rahul Gandhi at a political rally.

India may stand tall among its South Asian neighbours for its growing economic clout. But does that hold true in terms of the political empowerment of more than 586 million Indian women?

If we look at India’s close neighbour Nepal, the mountainous country definitely leads in the region in having more women in parliaments than its big neighbour. Nepal stands at 36 as per the Inter Parliamentary Union (IPU) 2018 rankings. The present 275-member Nepalese Lower House has 90 women, which is about 32.7 per cent of the total strength, while the 59-member Upper House has 37.3 per cent of women with 22 seats. The country is now led by a woman head of state. Nepal also has a policy of 33 per cent reservation for women in all state institutions, including the national legislature.

On the eastern front, Bangladesh, another close neighbour of India, is at 92 in the IPU ranking. Bangladesh has a policy of reserving 14 per cent of seats for women in its Parliament. The country had two women Prime Ministers, one with two terms, and the other is the present incumbent in her fourth term, becoming the longest serving Prime Minister in the country. The 10th general election brought 70 women to the 350-member single house, which was 20.3 per cent of the total strength.

Even the Islamic republic of Pakistan is at 94 in the current IPU rankings, and also has a policy of reserving 17 per cent seats for women in the Lower House and 15 per cent in the Senate. In its recently-elected Lower House, there are 69 women, comprising 20.2 per cent of the representation in a 341-member House, while in the 104-member Upper House, there are 20 women, which is 19.2 per cent of the total strength. The country had a woman Prime Minister for two terms, who however, could not complete her full terms and was assassinated while campaigning for the third term.

Bhutan, a small country tucked in the mighty Himalayas, also marched past India, at 133 in the IPU rankings. In its 47-member Lower House, there are seven women, which is about 14.9 per cent of the total strength. The 25-member Upper House has four women, having 16 per cent representation. Bhutan, however, follows no policy of reservation and is of the view that such a measure hurts the spirit of equality.

Some other countries in the region like Mauritius is just behind India at 152. The 69-member single House has eight women members, which is 11.6 per cent of the total strength. Mauritius has increased the gender quota from six per cent to 26 per cent in 2012 in local government, but no such policy exists for the national Parliament.

Some other countries in South Asia like the Maldives stands at 177 in IPU ranking, and has only five women in a 85-member House, which is just 5.9 per cent of representation. The country has no policy for gender quotas either in local or national governments. Sri Lanka is another bottom ranking country at 179 in the IPU list. The single House in the country has now 13 women members in the 225-member House, comprising just 5.8 per cent of the total seats. Sri Lanka, however, has a long history of having women in Parliament, and also had two women Prime Ministers, one of them, subsequently became the country’s President. The country has a mandatory quota of 25 per cent for women in local government.

The story of war-ravaged Afghanistan is entirely different. In the 2017 IPU rankings, it was far above India at the 54th rank. But today, it is one among the unranked countries in a list of 187 countries. This is due to the non-availability of relevant data from the October 2018 elections, in which a record number of 417 women were in the fray. The present 68-member Upper House has 18 women, that is 26.5 per cent of its total strength. The Afghan Constitution way back in 2004 provided 27 per cent of the seats to women in the 250-member Lower House and 50 seats in the House of Elders, which made the Afghan Parliament one of the most women-representative countries in the region. Before the October 2018 parliamentary elections, women held 27.7 per cent of seats in the Lower House, 0.7 points higher than the 27 per cent earmarked in the constitutional quota.

India at 151, slipping from 148 in the 2017 IPU ranking, has only 11.8 per cent women’s representation in the 542-member Lower House, the Lok Sabha, while it is 11.4 per cent in the 237-member Upper House, the Rajya Sabha. A recent election analysis has revealed that there are just 62 women MLAs among the 678 members of legislative assemblies elected in the 2018 state elections in the five states of Rajasthan, Madhya Pradesh, Chhattisgarh, Telangana and Mizoram. They are home to 93 million women, but only nine per cent MLAs as women, down from 11 per cent from the previous 2013-14 assembly elections. Only Chhattisgarh witnessed an increase in the proportion of female MLAs. Mizoram continues to have zero female representation in the Assembly.

India is definitely far off from reaching the global average of 22 per cent in women’s representation in the higher political power structure and also has fallen behind some of the countries in the neighbourhood. India, however, had a woman President and a Prime Minister for three terms. But we can’t take solace in this in the face of the existing huge gender gap in politics.

Many countries in the world like Austria, Cameroon, Canada, France, Sweden or South Africa, who have fared better in the IPU rankings, have introduced a system of “voluntary party quotas”, which ensured a certain percentage of seats for women in their electoral lists, parliaments and governments.

Sadly, in Indian politics, “caste”, “region” and “religion” play a far more dominant role, while women are not considered either a“political class” or a “unified votebank” or as potential winners. Indian women are hardly visible in the organisational hierarchy or in the electoral fray. In the last Lok Sabha polls, the BJP fielded only 38 women candidates, and the Congress 60. This confidence-deficit also prevails in women-led political parties. Mamata Banerjee’s Trinamul Congress gave tickets to only 43 women, Mayawati’s BSP 21, and the AIADMK, then led by J. Jayalalithaa, 29 in the last Assembly polls.

India, of course, scripted a new story by reserving one-third of seats for women in rural and urban local bodies through constitutional amendments in the early 1990s. India can perhaps steal a march over many countries if the long pending legislation earmarking 33 per cent of seats for women in Parliament and state legislatures sees the light of the day as demanded recently by women MPs from the Rajya Sabha, cutting across party lines. But will it be an agenda in the upcoming electoral battles in 2019? Sadly, it doesn’t seem so!

The writer is a former director-general of Doordarshan and All India Radio, and a former press secretary to the President of India