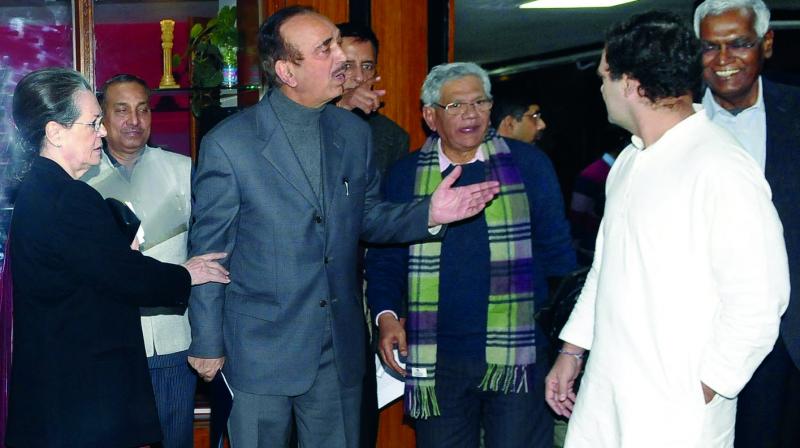 New Delhi: A block of 20 Opposition parties led by the Congress on Monday appealed to the 13 states who have said no to the National Registrar of Citizens (NRC) to say no to the National Population Register (NRP) as well, as it is a prelude to the NRC.

The BJP was quick to hit back saying the resolution adopted by the Opposition parties must have made Pakistan happy.

The SP, BSP, AAP, Trinamul Congress, Shiv Sena and DMK were conspicuous by their absence. But Congress sources said there was some “communication gap” with parties like Shiv Sena and Samajwadi Party, others said the parties were absent mostly because of local issues.

The resolution passed by the parties in attendance said: “Those chief ministers who have announced that they will not implement the National Register of Citizens (NRC) in their states must consider to suspend the National Population Register (NPR) enumeration also as it is a prelude to the NRC”.

It further said: “The CAA, NPR and NRC is a package that is unconstitutional, which specifically targets the poor, the downtrodden, the SC/STs and the linguistic and religious minorities. The NPR is the basis for the NRC. We demand the withdrawal of the CAA and the immediate stoppage of the nationwide NRC/NPR”.

Congress president Sonia Gandhi said the BJP-led government has let loose a reign of oppression, spreading hatred and trying to divide people along sectarian lines and asserted that there was “unprecedented turmoil” in the country,.

Accusing the Prime Minister and home minister of misleading the nation on CAA and NRC, Mrs Gandhi said, “They have contradicted their own statements of only weeks ago, and continue with their provocative statements while remaining insensitive to the state suppression and violence that is increasingly becoming commonplace.”

Talking about the nation-wide spontaneous protests by youth supported by citizens from all walks of life, she said, “The immediate cause is the CAA and NRC but they reflect widespread frustration and pent up anger, which is now out in the open. The response of the police in UP and Delhi has been shockingly partisan and brutal.”

She also said at the meeting that the real issue facing India was the collapse of economic activity and slowing growth and development affecting all sections of society, especially the poor and disadvantaged.

Union minister and Bharatiya Janata Party leader Ravi Shankar Prasad said, “Opposition resolution must have made Pakistan happy. The CAA is a chance to expose barbaric treatment of minorities in Pakistan.”

He also pointed out that six parties skipping the meet exposed the myth of Opposition unity.

“We are busy discussing everything except the main issue, which is joblessness and our economic strength. This is being destroyed by Narendra Modi — Demonetization part-I and part-II. Instead of addressing this, instead of going to the students of India and saying, ‘Listen! This is what I am going to do, this is how I am going to give you jobs, this is how I am going to set the economy right. He is doing the biggest disservice to this nation by dividing this nation and distracting the attention of people,” he said.

Congress leader Ghulam Nabi Azad and CPI(M) general secretary Sitaram Yechury told the media that the leaders felt that the BJP was trying to polarise the country on deeply communal lines and therefore the appeal was to all state government who have said no to NRC to say no to NPR as well.

Sources though maintained that the legality of boycotting the NPR by states was not clear and the resolution adopted was a political one with the hope that the pressure works on the government and it withdraws the CAA.

The Opposition parties also decided to mark three dates this month — January 23, 26 and 30 — as part of the its anti-CAA and NRC protests. While Jan. 23 is Netaji Subhash Chandra Bose’s birthday, Jan. 26 is Republic Day and Jan. 30 is Mahatma Gandhi’s death anniversary.

BSP, SP, AAP, TMC, DMK and Shiv Sena stayed away from the Opposition meet. While BSP chief Mayawati said the meeting would “demoralise” her party workers, AAP and Sena said they had not received an invitation.

Taking to Twitter, Ms Mayawati said her party workers were upset after the Congress in Rajasthan indulged in “horse-trading” by getting BSP MLAs to join their party, following the election results. She, however, made it clear that the BSP was opposed to the CAA and demanded that the government withdraw it.