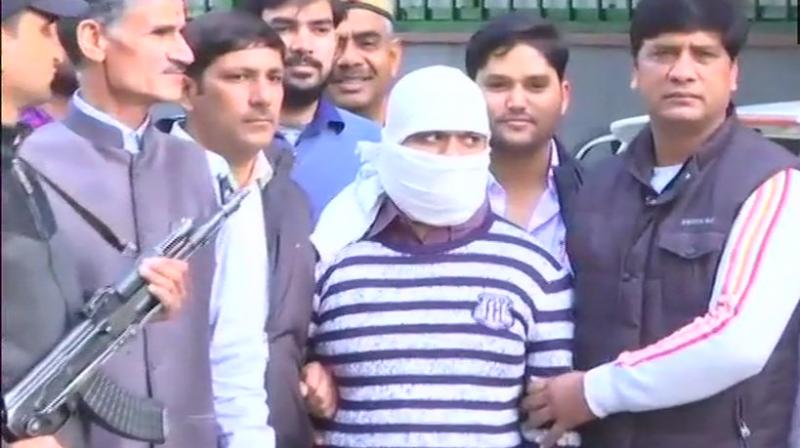 Indian Mujahideen suspect, Ariz Khan alias Junaid, has been on the run since the September 2008 Batla House encounter. (Photo: ANI/Twitter)

New Delhi: An alleged Indian Mujahideen (IM) terrorist, who was linked to serial blasts in Uttar Pradesh, Gujarat and Delhi and had escaped during the Batla House encounter, was arrested from the Indo-Nepal Border, police said.

"Khan was involved in reviving the IM and SIMI in the country after the arrest of its big leaders. He was absconding since a decade and a reward of Rs 15 lakh had been announced for his arrest," Kushwah said.

He was a member of Azamgarh (Sanjarmur) module of the IM and was based in Nepal where he was teaching at a school. His associate, Tauqueer, was arrested earlier by the Delhi Police in January this year.

Khan was wanted by the Delhi Police in connection with serial blasts in September 2008 in the national capital in which about 30 people were killed and over 100 injured.

He was also wanted in the Batla House encounter in the same year in which Delhi Police Inspector Mohan Chand Sharma was killed.

"Khan was present along with other terrorists in Batla House and had managed to escape along with an accomplice during the encounter," the officer said.

He was an expert bomb-maker and a core member of Azamgarh module of the IM, He was involved in "conspiring and planning" Delhi, Jaipur and Ahmedabad bomb blasts in 2008 carried out by the IM, he said.

He was linked with deadly terror strikes in which about 165 people were killed and over 535 were injured. A Red Corner notice was also issued by the Interpol against him.

Khan was radicalised and introduced to terrorism when he was studying in a school in his hometown Azamgarh, said the officer.

In November 2007, three Jaish-e-Mohammad terrorists were thrashed at the Lucknow sessions courts. So in order to teach a lesson to lawyers in Uttar Pradesh, blasts were planned at Varanasi, Faizabad and Lucknow courts.

On November 23, 2007, Khan along with his IM associates planted improvised explosive devices at the courts. They also sent an e-mail to news channels five minutes before the blasts to claim responsibility for them, he said.

Khan played a "pivotal role" in Delhi serial blasts of September, 2008. His associates Mohammad. Saif and Khalid alias Kodi brought the explosive from Udupi (Karnataka) and he along with Atif Ameen, a friend from school days, received the explosives in Delhi, the officer said.

Also, Khan along with Bada Sajid bought materials for the explosion from various markets of Delhi. The group conducted recce of targets and on September 13, 2008 along with Atif Ameen Khan planted IEDs at M-Block Market, Greater Kailash.

Thirty people were killed and 100 were injured in the serial blasts at Karol Bagh, Connaught Place, Greater Kailash, the officer said.

After escaping during the Batla House encounter, Khan and his accomplice, Shehzad, visited their relatives in Delhi, UP, Rajasthan and Maharastra to seek shelter and financial aid but they did not receive any help.

A month later they separated and Khan crossed over to Nepal. He later managed to get citizenship and a passport of the country in the name of Salim Khan, through fake papers.

Along with Tauqueer, he started teaching at a school there. He had studied B Tech at an institute in Muzaffarnagar but had failed in the second year, said the officer.

He remained in Nepal till 2014 and during this period he came in touch with Riyaz Bhatkal who motivated him to come to Dammam, Saudi Arabia for arranging money to revive the IM in India, he said.

In September 2014, he went to Saudi Arabia where he met many IM and SIMI sympathisers.

After returning from Saudi Arabia, he started visiting India clandestinely to revive the IM. Through his established contacts, he procured logistics for his visits to India. He was scheduled to meet a contact in UP when he was caught, added the officer.