Explosion on CRPF convoy in Pulwama was heard 10 km away: Locals

Some of the bodies were so badly blown up that officials feel it may take some time to identity them. 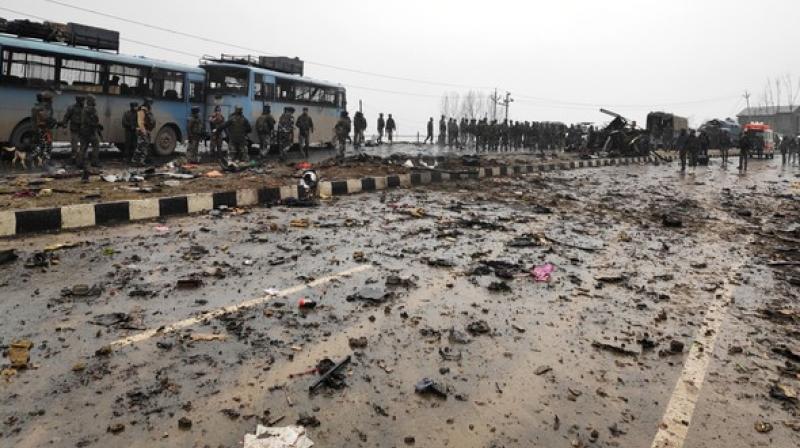 This was the first suicide car bomb strike in Kashmir since the 2001 attack on the Jammu and Kashmir Legislative Assembly that left 41 persons, including three suicide attackers, dead.

Srinagar: The scene of devastation and destruction caused on Thursday by the suicide car bomb attack that killed at least 39 security personnel sent chills down the spine of unsuspecting locals who witnessed the blood bath in Pulwama district's Awantipora area, about 20 km from here.

The explosive used in the attack was so strong that the blast was heard from 10-12 km away, including some parts of Srinagar adjoining the Pulwama district, locals said. Body parts of the terrorist, identified as Adil Ahmad, and the CRPF personnel killed in the attack were strewn on the Jammu-Srinagar Highway, where the incident happened. Some of the bodies were so badly blown up that officials feel it may take some time to identity them.

This was the first suicide car bomb strike in Kashmir since the 2001 attack on the Jammu and Kashmir Legislative Assembly that left 41 persons, including three suicide attackers, dead. More than 2,500 Central Reserve Police Force personnel, many of them returning from leave to rejoin duty in the Valley, were travelling in the convoy of 78 vehicles when the suicide bomber rammed his vehicle into a bus carrying 39-44 jawans, officials said. There was nothing at the scene of the incident to suggest which type of vehicle was used to carry out the attack except the mangled heap of iron of the bus that was the target. As soon as the explosion took place, people started running for safety. The shopkeepers at Lethpora market, which is less than 300 metres from the scene of the attack, downed their shutters and fled. The scene of the incident is not very far from the Commando Training Centre at Lethpora, which was stormed by Jaish-e-Mohammad terrorists on December 31, 2017, killing five CRPF personnel.

The Jammu-Srinagar Highway has been witness to several terror attacks on the security forces. CRPF bore the brunt of an attack at Pampore, less than seven kilometres from Lethpora, in June 2016, losing eight jawans while 22 others sustained injuries. Terrorists had attacked a CRPF convoy in Pampore area in February that year as well, before taking refuge at a government building. The operation against the holed up terrorists lasted more than two days and resulted in death of nine persons, including three Armymen and three ultras.