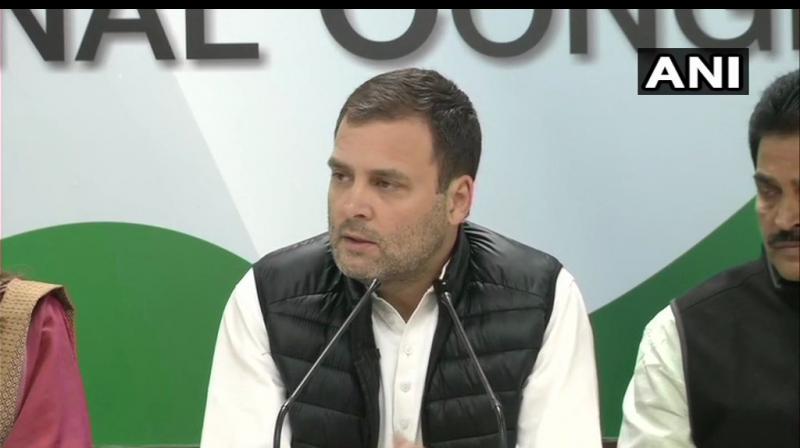 The BJP government has exploited the small businessmen of Gujarat and all over the country through GST, alleged Rahul Gandhi. (Photo: ANI)

Valsad: Congress President Rahul Gandhi on Thursday said if Congress will replace the 'Gabbar Singh Tax' on small businessmen with the real Goods and Services Tax (GST) if it is voted into power in 2019.

Addressing a 'Jan Aakrosh' rally here, the Congress chief said: "If Congress government comes to power in 2019, we will bring the real 'GST'. The BJP government has exploited the small businessmen of Gujarat and all over the country through 'Gabbar Singh' Tax (GST)."

The Congress president, who is visiting Gujarat nearly a year after he led the party's campaign for the 2017 assembly elections said that farmers and tribals have been neglected in Gujarat.

"The Narendra Modi government is not bringing land acquisition bill drafted by the Congress, which took care of concerns of farmers and tribals. Their Bharatmala project is actually Bharatmara, it is killing Bharat," he alleged.

He said: "If the land is not put to use within five years of acquisition, then it should be given back. In Chhattisgarh, after forming the government, we gave thousands of acres of land back to farmers and Adivasis. This is the law."

Continuing his tirade against Modi, Rahul said that farmers had asked the Prime Minister to waive off loans but Modi refused to do so. “Farmers ask the Prime Minister to waive off loan, to which they refused saying that our policy is not like that,” Rahul said. “The Congress gave farm loan waiver within 10 days of coming into power in Madhya Pradesh, Rajasthan and Chhatishgarh,” he claimed.

Centre has announced income supplement to farmers in this year's budget. Under PM Kisan Samman Nidhi Scheme, poor and marginalised farmers of the country are set to get Rs 6000. For this, the government has launched an official website at www.pmkisan.nic.in. The Rs 6000 help will be provided in three instalments of Rs 2000 each directly to the bank accounts of the eligible farmers.