Bedi is being encouraged by the Prime Minister to create problems for our government alleges Narayanasamy. 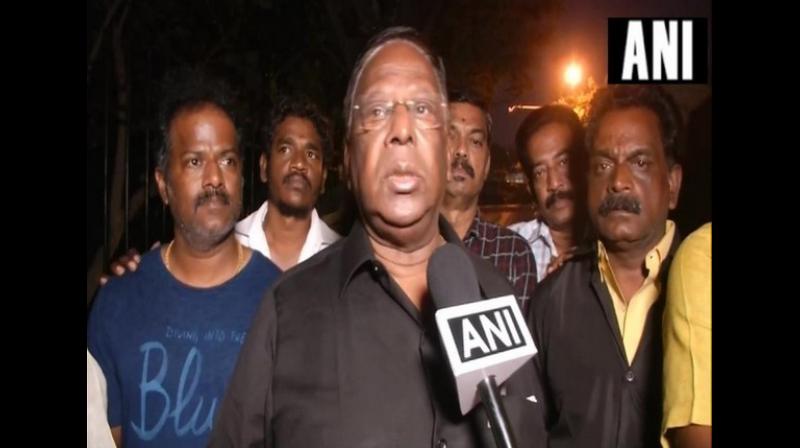 CM Narayanasamy protesting outside the Raj Bhawan in Puducherry on Thursday. (Photo: ANI)

Puducherry: Puducherry Chief Minister Velu Narayanasamy on Thursday accused Lieutenant Governor Kiran Bedi of interfering in the government’s functioning and alleged that Bedi is being encouraged by Prime Minister Narendra Modi to create problems for his government.

“She (Kiran Bedi) has no power at all, she has to only be a post office and sign papers which have been sent by the council of ministers. She has no right to touch cabinet decisions, she is vetoing decisions. She is being encouraged by the Prime Minister to create problems for our government," the Chief Minister told ANI.

Bedi has been at loggerheads with the Puducherry government on various issues with Narayanasamy accusing her of delaying clearance to welfare schemes and bypassing the elected government.

On Wednesday, he had staged a protest outside the Raj Bhawan, the official residence of Governor Kiran Bedi alleging she was misusing her powers and also interfering in the day-to-day activities of the government.

Protesting outside the Raj Bhawan wearing black clothes, Narayanasamy alleged that Bedi was forcing upon the law-abiding citizens, rules such as the compulsory wearing of helmets and others.

The Chief Minister urged that people of Puducherry are law-abiding citizens and nobody should impose rules upon them forcefully. He also urged that the helmet enforcement rule by Puducherry director general of police S Sundari Nanda should be taken up in a phased manner.

In a tweet, Narayanasamy alleged that Bedi had not yet resolved 39 pending issues which were raised and sent to her, including the release of funds, payment of salaries and approval of projects.

"When there’s no culture of wearing a helmet in Puducherry and its CM keeps stalling enforcement and every 3rd day there’s a fatal accident, due to non-wearing of a helmet, where does one begin? Give up or take it in one’s own hands as well, alongside challenging enforcement agencies?" she wrote on Twitter on February 10.