Cong 'complains too much', Goa Guv has history on her side: FM

Goa Governor Mridula Sinha had invited Manohar Parrikar to form the government, which led the Congress to approach the apex court. 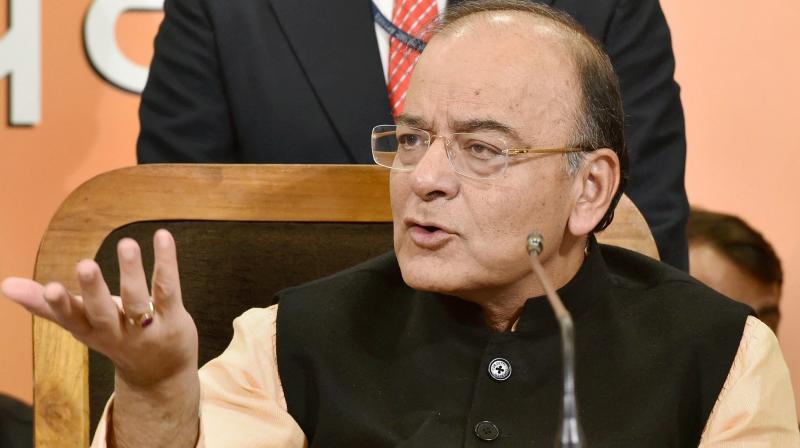 New Delhi: Finance and Defence Minister Arun Jaitley on Tuesday lashed out at the Congress, saying that the grand old party ‘complains too much’.

In a hard-hitting Facebook post, the Finance Minister, who now has additional charge of Defence, said there are ‘several precedents which support the decision of the Goa Governor’ to invite BJP to form the government in the state despite winning less seats than the Congress.

In a post which began with, ‘The Congress Party complains a bit too much. It accused the Bharatiya Janata Party (BJP) of ‘stealing’ the mandate in Goa. It unsuccessfully petitioned before the Supreme Court. It attempted to raise issues in the Lok Sabha. What are the facts?’ Jaitley outlined the reasons why Sinha was justified in inviting BJP, with 13 seats, to form the government with the help of allies, instead of Congress, which had won 17 seats in the 40-member legislature.

He pointed out several instances in the past, when Governors had invited the Congress, in alliance with other parties, to form the government despite BJP or another party winning more seats in a hung Assembly of a particular state.

He even quoted former President KR Narayanan, who had invited Atal Bihari Vajpayee-led BJP to form the government at the Centre in 1998.

Ridiculing the Congress, Jaitley said the party was complaining and had even approached the Supreme Court, despite not even staking claim before the Governor to form a government.

The Supreme Court on Tuesday rebuked the Congress in response to its petition challenging Manohar Parrikar’s appointment as Goa CM, saying the party should have approached the Governor with numbers, instead of the apex court. However, it shortened the time available to Parrikar to prove his majority on the floor of the House, from 15 days to 2 days.

In later developments, Goa BJP chief Vinay Tendulkar said that his party would inform the Goa Governor that it could prove majority on the floor of the House tomorrow itself.

Meanwhile, Goa Congress chief Luinzinho Falero appealed to the regional parties to support the Congress. “Sonia ji is a rare example of sacrifice in the democratic world. She had a chance to be PM twice but she chose Dr Singh. So we have told all like minded MLAs and parties that we are ready to sacrifice, please join us,” he said.

The Congress also met Governor Mridula Sinha and asked her to postpone the swearing-in of Parrikar, which is scheduled for 5 pm today.