The doctor, hailing from Nellore, had checked into a private hospital here with Covid-19 symptoms 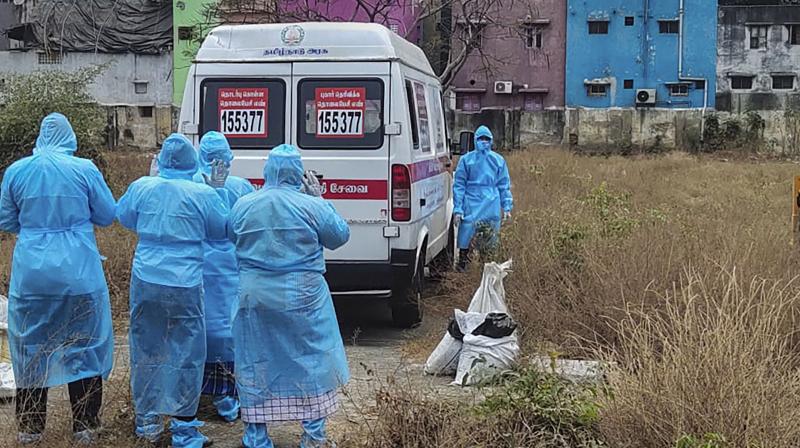 Chennai: A bizarre pathos was played out between crematoria in Chennai's western suburb on Monday, after a doctor from Andhra Pradesh with Covid-19 new coronavirus symptoms who died in a private hospital here on Sunday, was refused cremation by locals on fear his remains could spread the virus.

The doctor, whose name was given as Dr Lakshmi Narayan Reddy, aged 60 and hailing from Nellore, had checked into a private hospital here with Covid-19 symptoms, but his condition deteriorated and he died last night.

But worse was to follow. When the hospital's health workers, who accompanied the body to a crematorium in Ambattur to quickly perform the last rites on Monday, the locals protested against cremating his body there. The health workers with personal protection equipment (PPE) pleaded with Corporation officials, but to no avail as a mob gathered there.

As the situation got out of control, the health staff put back the body of the deceased doctor into the ambulance and left the place, seeking the State Police's help to handle the crisis. Then, later with the help of the cops and the Chief Secretary's timely intervention, Dr Narayan Reddy's body was cremated in another crematorium in Thiruverkadu, sources said.

Asked about this terrible happening, Tamil Nadu Health Secretary, Dr Beela Rajesh said this was an extremely unfortunate development as detailed guidelines for "disposal" of the bodies of persons who die of suspected Coronavirus or those who tested positive, have been given in detail to all government hospitals. This private hospital apparently was unaware of it.

Assuring that such a thing will not happen again, Dr. Beela Rajesh said the painful incident was the result of a "coordination gap". "It is a very sensitive issue." The body disposal guidelines have been communicated to all private hospitals too, and the matter has been sorted out with the Chief Secretary's Dr K Shanmugam's intervention, the health secretary said, adding, "we have had no such issues in any of the government hospital."  The deceased doctor had reportedly tested positive for Coronavirus in Andhra Pradesh and his death would be counted in that State, she added.

On the overall situation in Tamil Nadu, Dr. Beela Rajesh said the total number of Covid-19 positive cases had gone up to 1,173 by Monday evening, with 98 new positive cases confirmed today. Of them 91 are "from a single source" and the remaining seven are their contacts.

Dr Beela Rajesh said three more doctors have tested positive for the virus, taking their number to 11 in the State. But there was no death in the last 24 hours in Tamil Nadu where the virus has claimed 11 lives so far. She said throughout the State, 31 children below ten years have been affected.

As a "matter of abundant caution", the health secretary said as early as January 2020, when no positive case of Coronavirus was reported either in the state or in the country, when WHO had declared "it is a medical emergency of International concern," Tamil Nadu had procured drugs in advance worth Rs.146 crore for symptomatic treatment of the virus.

Stating the State had also purchased and has enough stock of N-95 masks and PPEs for the frontline medical staff, besides ventilators since then, Dr. Beela Rajesh said the State has 24,000 confirmatory 'PCR' test kits now.

Tamil Nadu further ordered procurement of 1.40 lakh 'PCR kits' and the consignment has already arrived in Mumbai. It will reach the state in a day or two, she said to drive home how its focus was on rigorous and more testing, apart from the other elaborate measures taken on a massive scale to contain the spread of the virus.

The four lakh 'Rapid Test Kits (RTK)' would also arrive at the earliest, she said. "Our success so far is in the containment of Covid-19 virus spread and low mortality rate," she said.