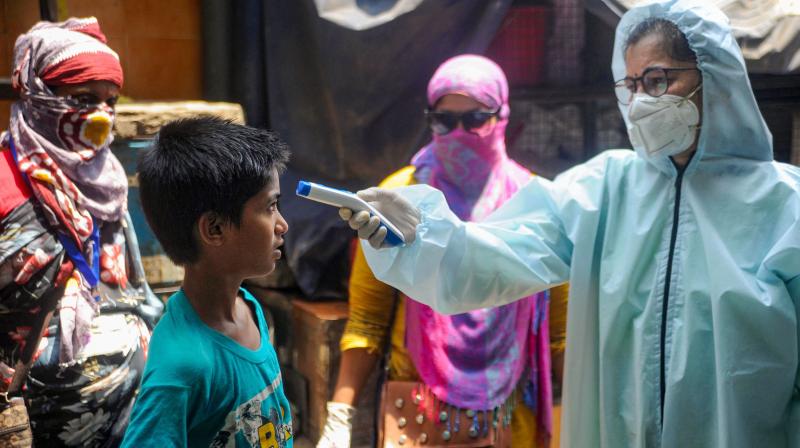 Mahim Dharavi Medical Practitioners Association conducts a thermal screening of residents of a housing society during a nationwide lockdown in the wake of coronavirus pandemic, at Dharavi in Mumbai. PTI Photo

While the number of active COVID-19 cases stood at 8,988, as many as 1,035 people have been cured and discharged and one had migrated, it said.

The total number of cases include 72 foreign nationals.

Fifteen deaths have been reported since Monday evening, of which 11 were reported from Maharashtra and four from Delhi.

Of the total 339 deaths, Maharashtra tops the tally with 160 fatalities, followed by Madhya Pradesh at 43, Delhi at 28, Gujarat at 26 and Telengana at 16, the ministry said in a statement.

Punjab and Tamil Nadu have registered 11 deaths each while West Bengal and Andhra Pradesh have reported seven deaths each, it added.

Karnataka has reported six deaths each while five people died in Uttar Pradesh.

Jammu and Kashmir has reported four fatalities while Kerala Haryana and Rajasthan have recorded three deaths each. Jharkhand has reported two deaths.

Bihar, Himachal Pradesh, Odisha and Assam reported one fatality each, according to the health ministry data.

A PTI tally of corona-infected people and death toll reported by various states as on Monday evening, however, showed at least 346 deaths.

According to the ministry's data updated on Tuesday morning, the highest number of confirmed cases in the country is from Maharashtra at 2,334 followed by Delhi at 1,510 and Tamil Nadu at 1,173.

Gujarat has reported 539 cases, followed by Andhra Pradesh at 432 and Kerala at 379.

The number of novel coronavirus cases has risen to 270 in Jammu and Kashmir, 247 in Karnataka, 190 in West Bengal and 185 in Haryana. Punjab has reported 167 infections so far.

Bihar has reported 65 cases, while Odisha has reported 54. Thirty-five people were infected with the virus in Uttarakhand, while Himachal Pradesh has 32 cases followed by Assam and Chhattisgarh with 31 cases each.

Jharkhand has reported 24 cases, Chandigarh 21 and Ladakh 15, while 11 cases have been reported from the Andaman and Nicobar Islands.

Goa and Puducherry have reported seven COVID-19 infections each, Manipur and Tripura two each, while Mizoram, Nagaland and Arunachal Pradesh have reported one case each.