THE ASIAN AGE. | M B GIRISH 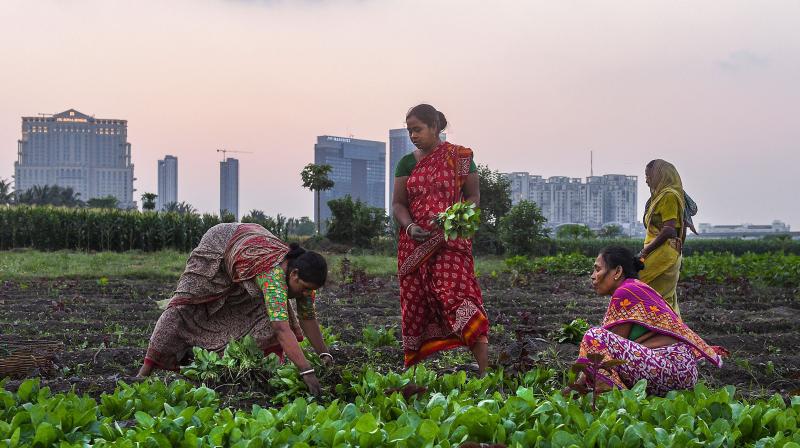 Farmers work on a field during the nationwide lockdown, imposed in the wake of coronavirus pandemic, in Kolkata. PTI Photo

Hassan: Former prime minister H D Deve Gowda on Monday alerted Narendra Modi that “chances are that farmers and agricultural labourers may revolt.” He suggested that procurement, transportation, processing, export, and marketing of fruits, vegetables and other agricultural commodities should have been exempted from the lockdown.

The JD(S) leader said the loss on account of a revolt by farmers and labourers would be much more than the impact of the coronavirus. He demanded the Union government pay compensation to farmers who have incurred losses on crops they harvested this season.

“The lockdown has shocked farmers and they feel like that it is nothing but falling from the frying pan into the fire,” stated Gowda.

The former PM told Modi that if suggestions made by him were implemented, the marketing problems of perishable goods can be solved to a great extent. In a letter to Modi on Monday, Deve Gowda felt that the government should have made arrangements to procure farm produce at the farm gate similar to the procurement of milk.

The government should have facilitated free movement of fruits, vegetables and other agricultural commodities from the producing areas to markets anywhere in the country.

In another suggestion made to the prime minister, Gowda wanted a national grid be created for the movement of materials from surplus areas to deficit areas of the country. For instance, he pointed out that in the past, HPCOMS in Bengaluru sent banana, coconuts, tomato, capsicum among others to NDDB, New Delhi and in turn HOPCOMS got apples, pears, plums among others from New Delhi.

“Such similar linkages are to be created throughout the country,” wanted the former Prime Minister and told the Union Government that Mr Gowda in order to boost the investment and employment generation.