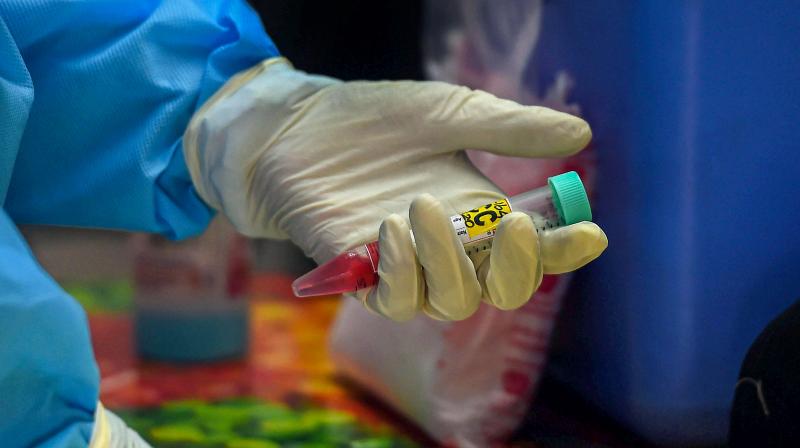 A doctor inside a protective chamber before collecting a swab sample at a newly installed Walk-In Sample Kiosk (WISK) for COVID-19 test at a government-run hospital during the nationwide lockdown. PTI photo

Mumbai: The number of COVID-19 cases in Maharashtra on Monday crossed the 2000-mark, with 352 more people, including 242 from Mumbai, testing positive for the novel coronavirus infection, a Health department official said.

While the number of total cases has gone up to 2334, the COVID-19 death toll increased to 160 with 11 more people succumbing to the infection on Monday.

Notably, Maharashtra had crossed the 1000-mark of COVID-19 cases on April 7.

Across the state, a total of 229 people have so far been discharged from hospitals after recovering from the viral infection.

The 11 fresh deaths were reported from the worst-hit Mumbai (9) while one death each was reported from Mira-Bhayandar region near Mumbai and Pimpri Chinchwad near Pune, the official said.

Among the 11 deceased, eight patients were suffering from diabetes, Asthma and heart disease, he added.

In neighbouring Thane circle, which consists of Thane city as well as several municipal corporations in Thane and Palghar districts, the total number of COVID-19 cases is 1790 with 116 deaths, the official said.

In Nashik circle in north Maharashtra which covers districts like Nashik, Ahmednagar, Dhule, Jalgaon and Nandurbar and all civic bodies, the number of patients who have contracted coronavirus infection stood at 64 with four deaths.

Notably, 29 of the total 64 cases from the Nashik circle are reported from the Malegaon municipal corporation, where two people have succumbed to the infection, the official said.

In Kolhapur circle in western Maharashtra, the number of coronavirus positive cases stood at 38 with one fatality, the official added.

The Aurangabad circle in Marathwada region has reported 25 cases and one death so far, while the tally for Latur is 13 cases, but no death.

In Akola circle in east Maharashtra, a total of 40 COVID-19 cases have been found with two deaths, he said, adding that Nagpur has reported 40 cases and one death so far.

A total of nine patients from other states are being treated in Maharashtra for the virus infection while one person has died, the official said.

"Of the total 43,199 laboratory samples in Maharashtra, 39,089 samples have tested negative and 2334 positive," the official said.

Out of the 755 members of Tablighi Jamaat from Maharashtra who had attended the religious event in Delhi last month, 50 have tested positive from various cities, the official added.

Moreover, six contacts of these people have also been found to have contracted the infection in Ahmednagar and one in Pimpri-Chinchwad, he said.

"As per the guidance from the Centre, a cluster containment action plan is being implemented in places where groups of patients have been found in the state," he said, adding that a total of 4223 surveillance squads have been deployed across the state and 15.93 lakh people have been surveyed.