Rajasthan, Punjab, Haryana and Uttar Pradesh governments have announced that schools should not force parents to pay fees during lockdown 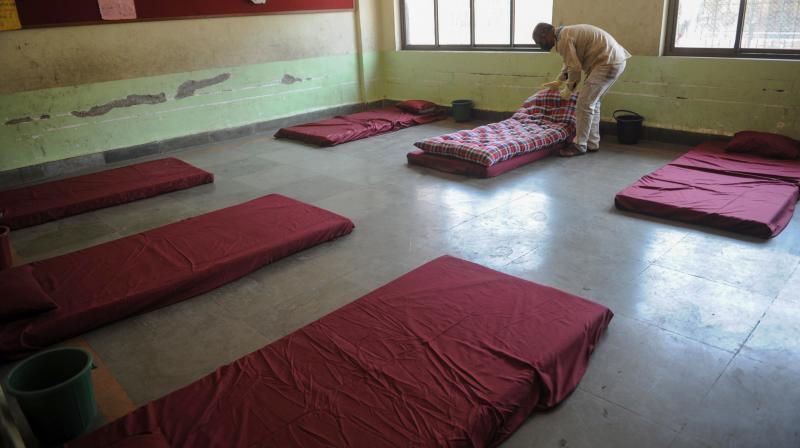 An MCGM member prepares beds at a quarantine center inside a BMC school for COVID-19 patients during a nationwide lockdown in the wake of coronavirus pandemic, at Dharavi in Mumbai. PTI photo

New Delhi: While parents are waiting for school fee waiver during the lockdown due to COVID-19 situation in the country, several schools have announced a fee hike adding to their woes.

Parents have started an online petition to the HRD Ministry demanding a directive to schools for not implementing fee hike this academic session at least till schools reopen.

While the Gujarat government had on Monday announced that private schools will not hike fees for an year, the West Bengal government had appealed schools to refrain from hiking fees. However, no clear instructions have been issued on fee hike in Delhi-NCR.

"With no information when normalcy will return, when we could head back to our respective workplace is the question that remains unanswered and here, I receive an intimation from the school regarding the hike in fee. I was baffled that how would I be able to cope up? I am anxious to know about the school fee hike and transport fee hike which the school says is to meet the cost demands for the academic year 2020-21," said Pivit Joshi, whose son studies in a prominent school in Noida. He did not wish to identify the name of school.

Jagriti Shukla, a parent in Gurgaon, said, "We understand the schools' concern that they need to pay salaries and cannot waive fees but at least hike can be avoided at such crucial time. Why the government has not passed any order in this regard?"

Similar concerns were shared by Rajesh Kumar, who said the fees hike has added to the financial woes already caused by pay cuts or loss of incentives.

"We are getting basic pay but the performance linked incentives have been suspended for the lockdown period. The appraisals have been deferred to next financial year but the school's fee hike is going on as per usual," he said.

The schools were closed by mid March, ahead of the nationwide lockdown announcement due to the spread of coronavirus. The 21-day lockdown, which was scheduled to end today, has now been extended till May 3. However, several schools have already begun teaching and learning activities online.

Rajasthan, Punjab, Haryana and Uttar Pradesh governments have announced that schools should not force parents to pay fees during the lockdown. However, there is no clarity among parents about whether no fees will be charged during the period or they will have to be paid later.

While the Delhi government has not issued any directive about any possible fees waiver, the private schools in Delhi are supposed to get clearances on fee hike from government's fee review management committee.

The death toll due to coronavirus infection in the country rose to 339 while the number of cases soared to 10,363 on Tuesday, said the Union Health Ministry.

While the number of active COVID-19 cases stood at 8,988, as many as 1,035 people have been cured and discharged and one had migrated, it said.

The total number of cases include 72 foreign nationals.