With over 100 cases, Guntur district in AP emerges as virus hotspot 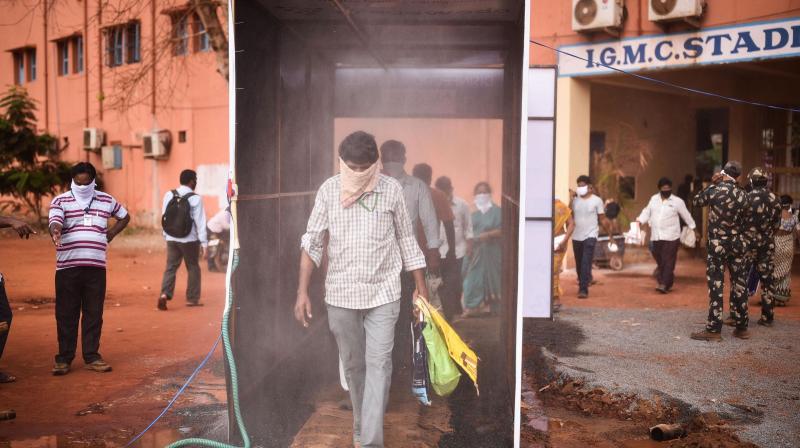 Amaravati: Two deaths due to coronavirus and 34 new positive cases of the disease were confirmed in Andhra Pradesh, a state government bulletin said on Tuesday. With this, the overall toll has now increased to nine and the number of affected in the state to 473. Two persons were discharged on Tuesday, taking the total number of patients cured and discharged to 14, the bulletin said.

The fresh COVID-19 cases were reported since Monday evening till 9 AM on Tuesday. Till date, 9,827 samples were tested in the state and 9,354 of them turned negative. In the last 24 hours, 2010 samples were tested of which 41 came out negative, it said.

Guntur district, where the first COVID-19 case of a Tablighi Jamaat attendee was reported on March 25, now crossed the century mark with a total number of 109 cases. As many as 16 new coronavirus cases were registered in the district since Monday night.

In neighbouring Krishna district, eight new cases were added while in Kurnool there was an addition of seven positive cases. Anantapuramu reported two and SPS Nellore district one fresh case overnight. Kurnool district now has a total of 91 cases, followed by SPS Nellore with 56.

With nine deceased and 14 discharged, the number of active cases in the state was 450. The two north coastal Andhra districts of Srikakulam and Vizianagaram continued to maintain a clean slate with zero cases of the pandemic.

A 56-year-old private doctor in Nellore, who contracted the coronavirus from a Tablighi Jamaat attendee, succumbed while undergoing treatment in a private hospital in Chennai on Monday. He was a diabetic and also suffered from hypertension, the bulletin said.

The doctor was first admitted to the government hospital in Nellore on April 3 and shifted to the private hospital in Chennai on April 6. A 55-year-old man in Vijayawada, who contracted the disease from another COVID-19 patient who returned from Jalandhar in Punjab, died on April 12, it added. He was a diabetes and asthma patient and had been on ventilator from April 9.

Two women, who contracted coronavirus from their kin, who returned from England to Visakhapatnam on March 28, had recovered and been discharged from hospital on Tuesday, the bulletin added.