India   All India  14 May 2017  Heath reports 'faked' to prevent another 'expose': Kapil Mishra
India, All India

Before tomorrow's expose, they are spreading fake news and trying to divert attention, Mishra said. 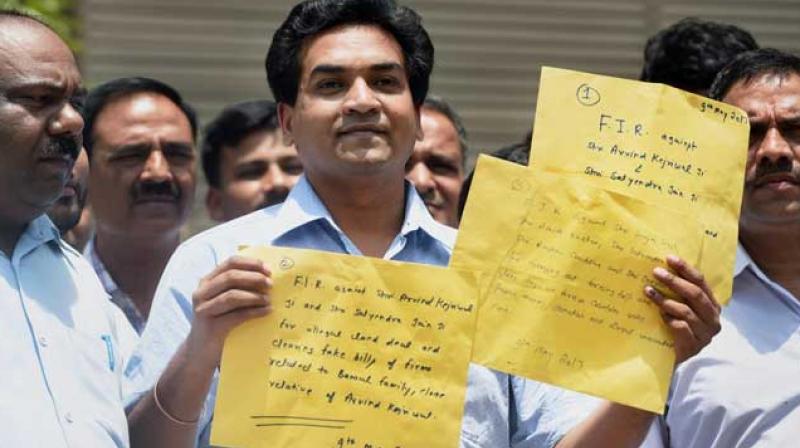 Kapil Mishra claimed his health report is 'faked' by doctors, who were reporting to Satyendar Jain. (Photo: PTI)

New Delhi:  Former Delhi minister Kapil Mishra on Saturday alleged that the police were trying to 'forcibly' take him to hospital based on 'fake reports' given by doctors, just a day before he was planning to make another 'expose'.

He also claimed that the report of his health is 'faked' by doctors, who were directly reporting to health minister Satyendar Jain.

"Before tomorrow's expose, they are spreading fake news and trying to divert attention. It is a ploy to end my hunger strike," Mishra said, on Saturday, in a tweet.

Mishra, who was recently sacked from Delhi cabinet, had started an indefinite hunger strike on Wednesday demanding Aam Aadmi Party (AAP) divulged details of foreign tours undertaken by five of its leaders.

Doctors had, on Friday, advised hospitalisation to Mishra due to drop in blood sugar level and dehydration. Mishra also asked the Delhi police commissioner to not take actions based on 'fake reports'.

"Sir @CPDelhi, Please don't do this just based on a fake report. I am fighting for a big cause. It's a conspiracy," the MLA said in a tweet.

Jha was detained by the police twice while he was proceeding to stage the planned hunger strike outside Mr Mishra's residence. He later began his 'indefinite strike' at Jantar Mantar.

Jha has demanded that Mishra come clean on the claim that he saw Health Minister Satyendar Jain pay Rs. 2 crore to Kejriwal.

In an 'open letter to Kejriwal, Mishra again pressed for divulging the details of foreign tours undertaken by five leaders of the party.

"How much drama will you create to hide one truth. You are trying all tactics to divert attention. Don't try any new tactic tomorrow.

"You (Kejriwal) made a strategy to use MLAs as a shield. However, only one MLA came forward to be that shield?" Mishra said, adding he would make his next 'expose' tomorrow.

He further said 'thief' is demanding to hand over all the evidences to him. "Then he would prove himself innocent by becoming a judge, a lawyer and a witness," he added.
In the morning, Jha, who is an legislator from Burari, went to Rajghat, Mahatma Gandhi's memorial, to 'seek blessings'.

"On May 7, Kapil Mishra had said that Arvind Kejriwal had met Satyendar Jain where he paid him Rs. 2 crore. My question to him is at what time did he meet the chief minister. Which car did he use? I have the entire day's video footage (of people entering Kejriwal).

"The whole world knows about Kejriwal's credentials and he (Mishra) should give evidence to back his claim. If it turns out to be true, even I will join him in his hunger strike against Kejriwal," Jha said.

Mishra hit back at Jha with another 'open letter' and 'advised' him to drink lots of water during the hunger strike.