The unknown miscreants also attacked a polling officer of the booth and vandalised the the polling booths. 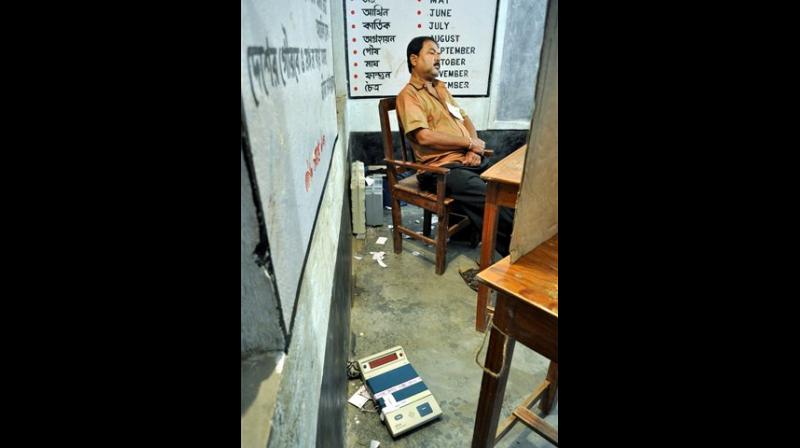 West Bengal: Bombs were hurled at polling booth in West Bengal's South 24 Parganas's Pujali and North Dinajpur's Raiganj districts on Sunday as elections to seven municipalities in the state is currently underway.

In addition to this, an Electronic Voting Machine (EVM) has also been damaged by a few unknown miscreants in ward number seven.

The unknown miscreants also attacked a polling officer of the booth and vandalised the the polling booths.

A heavy police force has been deployed at the site post the incident. Earlier in the morning, the local police had arrested an armed person from the nearby polling booth.
Several rounds of bullets were fired in different areas. As many as five persons have been injured in this regard.

The presiding officer of the booth told ANI, "The EVM's have been damaged and are dysfunctional at the moment. The glasses of the building are shattered and the furniture have been blown away. A couple of people who were presiding the booth have been trapped inside and have not been able to come out yet."

Joy Das, a voter of ward number seven told ANI, "I was physically tortured and assaulted by political goons when I tried to cast my vote. They beat me black and blue, hit me hard and did not let me cast my vote."

Another voter claimed to have seen two men with bombs and guns. There were around 40-50 bombs and there were heavy rounds of firing in the distinct areas.

"Last time in the municipal elections, there was hardly any political disruption, then why do we have to face so much of torture this time?," questioned a voter.

The voters alleged that the Trinamool Congress (TMC) tried to quash the former in order to cast votes for their own party and cease the locals from advocating the Bharatiya Janata Party (BJP). The police are currently investigating the matter.

Seven municipalities, including four in the hills around Darjeeling, in West Bengal are voting today after a campaign between Chief Minister Mamata Banerjee-led Trinamool Congress and Bharatiya Janata Party-Gorkha Janamukti Morcha alliance.