The court also issued notice to West Bengal police over the way the 25-year-old was taken into custody. 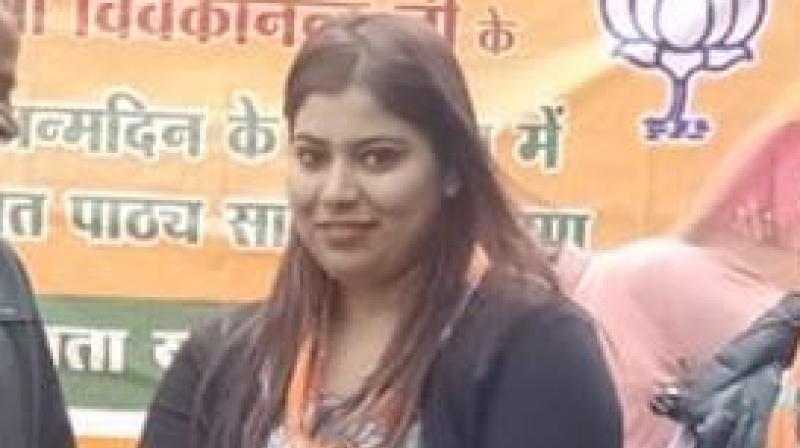 Sharma's plea was mentioned before the bench for an urgent hearing on Monday. However, the bench had agreed to hear it on Tuesday. (Photo: Faecbook)

New Delhi: The Supreme Court Tuesday granted conditional bail to a BJP activist arrested for allegedly posting a morphed image of Mamata Banerjee on social media and asked her to apologise, while observing that freedom of speech ends when it infringes upon others' rights.

"Subject to Priyanka Sharma tendering an apology in writing for putting up an objectionable picture on Facebook account, she shall be immediately released," a vacation bench comprising Justices Indira Banerjee and Sanjiv Khanna said in its order.

The court also issued notice to West Bengal police over the way the 25-year-old was taken into custody.

Sharma's plea was mentioned before the bench for an urgent hearing on Monday. However, the bench had agreed to hear it on Tuesday.

Senior advocate Neeraj Kishan Kaul, appearing for Sharma, had on Monday submitted that due to an ongoing strike by lawyers in West Bengal, there was no legal remedy available to her in the state and therefore he had to approach the apex court.

Sharma, convenor of the Bharatiya Janata Party's youth wing in Howrah, had on May 9 posted a picture of actor Priyanka Chopra at the recent Metropolitan Museum Gala in New York with Banerjee's face allegedly superimposed on the actor's.

Earlier, Sharma's family members had alleged that she was arrested at the ruling TMC's behest as she worked for BJP.

Her mother told ANI on Sunday, "My daughter was arrested because she used to work for BJP. This is all part of a bigger plot. This is the first time she is far away from us. Had she been a TMC worker, nothing bad would have happened to her, This has been done at the behest of TMC. The fact that she is in jail has increased our worries."

Sharma's arrest led to strong condemnation by BJP leaders, who alleged that TMC was indulging in politics of "hate and violence" and that an "Emergency-like situation' prevailed in the state.

On Sunday, BJP leader and Assam Minister Himanta Biswa Sarma met with Sharma's family members and said that the current situation in the state is reminiscent of 'Emergency'.

On Monday, Union Minister Mahesh Sharma denounced the West Bengal government for the arrest of the BJP activist and said that such politics is neither good for the country nor the state.

"In West Bengal, such things have been going on for long. Even (Prime Minister Narendra) Modi ji is called 'chor,' liar, expired and all that, but we did not take any action against anyone. This is because we believe that in politics there must be open debate and discussion. The opposition has an important role. But in West Bengal, they (TMC) are threatening our workers and indulging in politics of hate and violence. This is neither good for the country, nor the state," he told ANI.

Priyanka Sharma has been charged under Section 500 of the Indian Penal Code (defamation), sections 66A (offensive messages) and the non-bailable 67A (punishment for publishing or transmitting of material containing sexually explicit act, etc. in electronic form) of the Information Technology Act.

She was sent to 14 days judicial custody after being produced at a court in Howrah on May 10.