India   All India  14 May 2020  RSS-affiliate BMS to protest 'total withdrawal' of labour laws in BJP-ruled states
India, All India

The organisation will observe 'Nationwide Protest Day' on May 20, besides other agitation programmes. 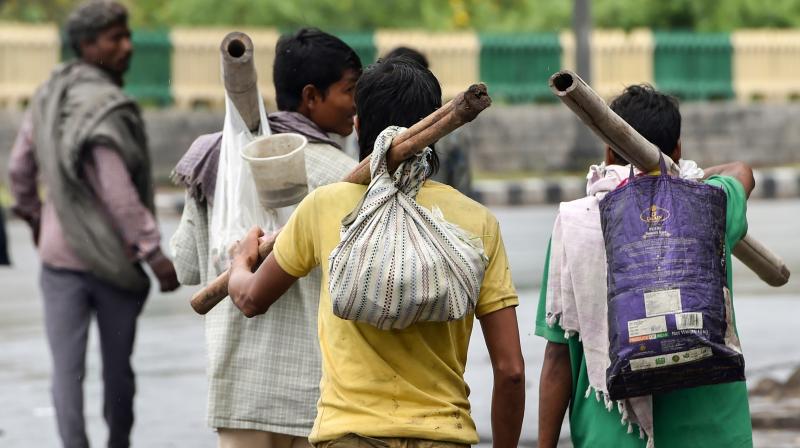 Labourers walk to return to their native places, during the 21-day lockdown across the country to contain the Covid-19, in New Delhi. (PTI)

New Delhi: The RSS-affiliated trade union BMS on Thursday condemned the "total withdrawal" of labour laws by the BJP-ruled Uttar Pradesh, Madhya Pradesh and Gujarat, and announced a countrywide agitation against it.

The BMS also said migrant workers' problems have aggravated during the novel coronavirus-triggered lockdown mainly because there is "gross violation" of laws by most of the states.

Criticising the freezing of labour laws as well as increase in the working hours from eight to 12 hours in some other states, Bharatiya Mazdoor Sangh (BMS) general secretary Virjesh Upadhyay said in a statement, "It is learnt that many other states are readying to follow the trend. This is unheard in history and is rare even in most undemocratic countries."

"...we are pushed to the wall and there is no other way out except going for agitation. Hence BMS decided nationwide agitation in solidarity with the fight against the anti-worker ordinances in UP, MP, Gujarat as well as increase of working hours in Rajasthan, Maharashtra, Goa and Odisha," the trade union said.

The organisation will observe 'Nationwide Protest Day' on May 20, besides other agitation programmes.

The decision was taken at the BMS national office-bearers' web-meeting held on May 13, in which it "strongly condemned the total withdrawal of labour laws in UP, MP and Gujarat."

"The meeting also discussed pandemic situation due to COVID-19 and its effects on various sectors. It welcomed the package declared by Prime Minister  Narendra Modi and the details announced in the first stage by the Finance Minister," according to the statement. In Uttar Pradesh, key labour laws have been suspended for three years.