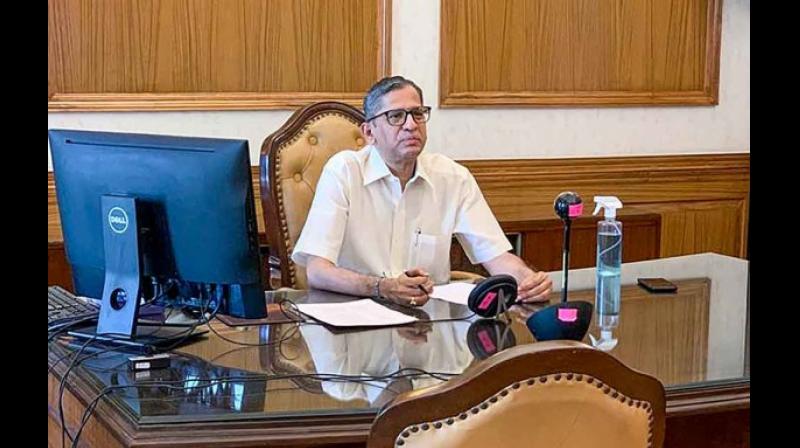 Justice N.V. Ramana launches a mobile app to grant access to the media to court proceedings without having to come physically to the Supreme Court, to help in their job of reporting. — PTI

New Delhi: Chief Justice of India N.V. Ramana said on Thursday that he was “actively considering” a proposal to allow the live telecast of Supreme Court proceedings given the court’s experience of over a year of hearing cases through video conferencing. However, he added that before going any further and initiating any “concrete steps” on this, he would seek the “general consensus” among his fellow Supreme Court judges. “I plan to seek general consensus among my colleagues in the court on the live streaming of cases,” he said.

The CJI also made it clear that the live streaming of proceedings would be limited only to a few courts and that too on a trial basis.

Speaking at the launch of a mobile app to grant access to the media to court proceedings without having to come physically to the Supreme Court, to help in their job of reporting, Justice Ramana said the media faces great challenges and noted its importance in the dissemination of information. The CJI referred to his own, first-hand experience when he, for a brief period, worked as a reporter for a Telugu newspaper before embarking on a legal career.

Recalling his brief association with the media before joining the legal field, CJI Ramana said: The media faces great challenges in reporting. I was a journalist for a brief time. That time we did not have car or bikes. Newspaper managements discouraged accepting any conveyance from the organisers of events. I too encountered difficulties as a journalist.”

The virtual event for the launch of the app to help the media cover court proceedings without coming there physically following the second wave of Covid-19 was also attended by Justices D.Y. Chandrachud, A.M. Khanwilkar and Hemant Gupta. Justice Chandrachud heads the court’s e-committee credited with putting in place the infrastructure for court hearing via video conferencing since March last year. Justice Chandrachud attended the virtual event via video conferencing even though he tested positive for Covid-19 on Wednesday.

Speaking on the occasion, Justice Chandrachud said: “We hope that this
facility will keep you all safe. Journalists are exposed so much to the outside world. I hope this is a part of the many steps which will be taken by the Chief Justice of India in the near future.” He shared the news that all the six people who had developed the mobile app are down with Covid-19 but continued with their work despite being confined to their homes.

Justice Gupta cautioned the media that the “links given to you are (to be) used in a bona fide manner, and unauthorised persons (should) not use it. It will not be fair to the institution”.

On the Covid-19 pandemic affecting the judiciary at all levels across the
country, CJI Ramana said: “As per the data available, 2,768 judicial
officers and 106 judges of high courts have tested positive. We are yet to receive the data from two major high courts. A total of 34 judicial officers and three high court judges have lost their lives battling this pandemic.”