Teams are being deployed in the coastal regions of Kerala, Karnataka, Tamil Nadu, Gujarat and Maharashtra 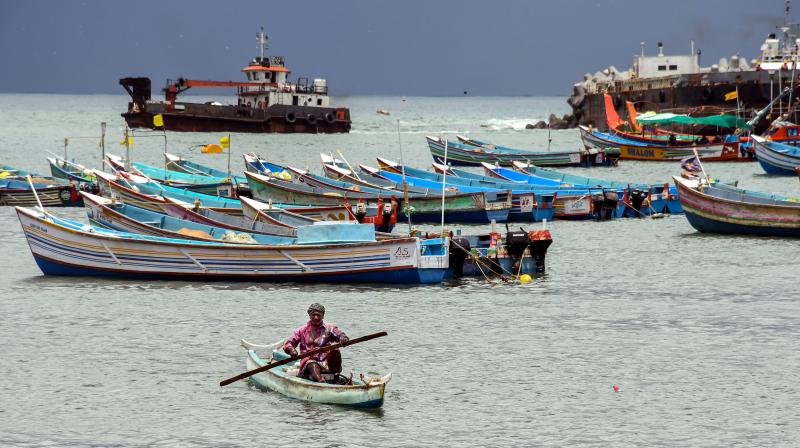 Fishing boats anchored at Vizhinjam Coast following a cyclone alert in Thiruvananthapuram, Thursday, May 13, 2021. Fishermen have been prohibited from venturing out to sea from Thursday due to the cyclone alert over the Arabian Sea. (PTI)

New Delhi: The National Disaster Response Force (NDRF) has earmarked 53 teams to tackle possible after- effects of cyclone 'Tauktae' that is developing in the Arabian Sea, a senior officer said on Friday.

NDRF Director General S N Pradhan said in a tweet that these teams are being deployed in the coastal regions of Kerala, Karnataka, Tamil Nadu, Gujarat and Maharashtra.

Out of the 53 teams, he said, 24 have been pre-deployed or stationed on the ground while the rest are on stand-by.

A single NDRF team comprises about 40 personnel and they are armed with tree and pole cutters, boats, basic medical aid and other relief and rescue equipments.

As per the Indian Metrological Department (IMD) and advisories issued by some of these costal states, a pressure area had formed over the southeast Arabian Sea and adjoining Lakshadweep area on Thursday.

"It will concentrate into a depression over the same region by Saturday morning and intensify into a cyclonic storm during the subsequent 24 hours," the IMD said in the warning report.

It is very likely to intensify further and move north-northwestwards Gujarat and adjoining Pakistan coasts.

The advisory said the cyclonic storm is likely to reach near the Gujarat coast around May 18 evening.

The name 'Tauktae' has been given by Myanmar which means 'gecko'. This is going to be the first cyclonic storm of this year along the Indian coast.