18 killed, 35 injured as bus overturns in UP

The accident took place about 25 kilometres from the Mainpuri district headquarters. 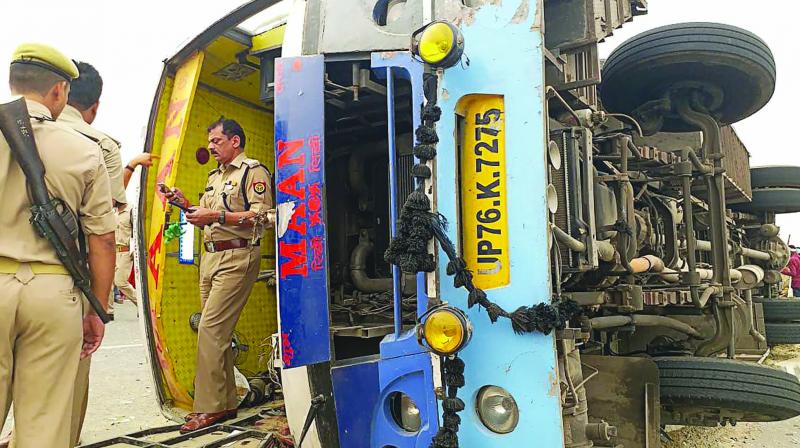 The Uttar Pradesh police inspects the site of a bus accident in Manipuri district. (Photo: AFP)

Lucknow: Eighteen people were killed and 35 injured when a bus overturned after hitting a divider in Tirathpur village on the Mainpuri-Etawah road early on Wednesday morning.

The accident took place about 25 kilometres from the Mainpuri district headquarters.

Mainpuri ASP Om Prakash Singh said that the bus, with over 70 passengers, was coming from Jaipur in Rajasthan and was on its way to Farukkhabad.

Initial investigations suggest that the driver of the bus was speeding when the vehicle hit the road divider. The collision led to the bus being overturned. The ASP said that 17 persons died in the accident on the spot and one passengers died during treatment. Those with serious injuries have been referred to hospitals in Agra. The bus driver, who lost his leg in the accident, has been admitted to the PGI in Sefai in Etawah.

The ASP said that efforts are on to identify the victims that include 16 men and one woman.

The police officer said the private bus was carrying mostly labourers, who work in brick kilns and were returning to their native villages.

Some passengers who were sleeping on the roof of the bus also lost their lives. The bus was registered in Farukkhabad and the police is trying to identify its owner.

Meanwhile, UP chief minister Yogi Adityanath has condoled the death of the passengers in the bus accident. He has announced a compensation of `2 lakhs each for the families of the deceased and `50,000 for the injured.

The chief minister also instructed officers to take all measures possible for the appropriate treatment of those injured.