This is 2nd major clash between India-Pak troops this month. 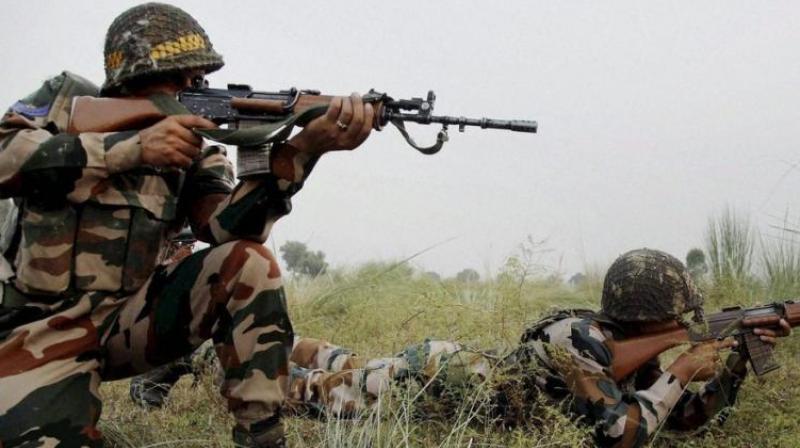 The BSF said that its men retaliated to the Pakistani firing and shelling “strongly and befittingly”, using the same calibre weapons. (Photo: PTI/File)

SRINAGAR: Four Border Security Force (BSF) personnel, including an officer, were killed and three others wounded in Pakistani firing and mortar shelling along the International Border (IB) in Jammu & Kashmir’s Samba district on Wednesday.

BSF’s inspector general (Jammu Frontier) Ram Awtar said that Pakistani firing was “totally unprovoked” and “in violation” of the November 2003 ceasefire understanding. “They resorted to unprovoked firing in Ramgarh sector. Four of our jawans including an assistant commandant were martyred. Three other jawans were injured,” he said.

Pakistani authorities, however, said in Islamabad that the BSF had initiated the firing after targeting civilian areas in Chirikot sector of the IB in which at least one civilian died.

While ASI Ram Niwas, who was manning the “morcha” (observation post), was hit first in Pakistani firing, other three were killed in the subsequent mortar shelling as they were trying to evacuate the ASI.

Three of the slain personnel were from Rajasthan, while one was from Uttar Pradesh. Assistant commandant Singh was a resident of Jaipur, ASI Niwas was from Sikar and constable Gurjar was from Alwar in Rajasthan. SI Kumar belonged to Etah in Uttar Pradesh.

The BSF said that its men retaliated to the Pakistani firing and shelling “strongly and befittingly”, using the same calibre weapons.

With these killings, BSF has lost as many as 11 of its men in cross-border firing in J&K so far this year. This is the highest number of casualties the paramilitary force has suffered along the IB in a year in the last five years, official statistics reveal.

According to officials, 50 people — 26 civilians and 24 BSF and Army personnel — have been killed in ceasefire violations along the IB and Line of Control (LoC) in J&K this year.

Giving details of the latest violation, BSF officials said that Pakistan’s Punjab Rangers resorted to unprovoked firing targeting its border outpost in Ramgarh sector of the IB on Tuesday night. “Firing by Pakistani border guards in Chamliyal post area of Ramgarh sector started around 10.30 pm on Tuesday and continued till 4.30 am Wednesday,” a BSF official in Jammu said.

In Islamabad, Pakistani authorities said that the BSF initiated firing after targeting civilian areas in Chirikot sector of the IB, which they call Working Boundary.

India’s acting deputy high commissioner J.P. Singh was summoned to foreign office in Islamabad to condemn the “unprovoked ceasefire violations” by Indian troops across the border, leaving at least one civilian dead.

Mohammad Faisal, who heads the South Asia wing in the Pakistan foreign office, summoned the Indian envoy and told him that the “deliberate” targeting of civilian populated areas “is deplorable and contrary to human dignity, international human rights and humanitarian laws.” He also told Mr Singh that the Indian government should allow the United Nations Military Observers Group in India and Pakistan (UNMOGIP) “to play its mandated role” in J&K.

This is second major clash between the facing troops along the IB this month despite Director General Military Operations (DGMO) of the two countries agreeing, on May 29, to implement the ceasefire pact of November 2003 in “letter and spirit”. A sector commander-level flag meeting between BSF’s deputy inspector general and Pakistan Rangers Brigadier was also held on June 4 at the Octrio Post in Suchetgarh area of border where it was decided that the two sides would “hold fire” along the 198-km long IB “develop confidence” and avoid active hostilities in future.

A statement issued by Pakistan’s foreign office on Wednesday alleged that Indian forces have carried out more than 1,100 ceasefire violations along the LoC and the Working Boundary (IB) so far this year resulting in the death of 29 civilians and injuries to 117 others.

“The ceasefire violations by India are a threat to regional peace and security and may lead to a strategic miscalculation,” the statement said.