Women, especially married, are found to be more unsafe not on roads but inside their homes, according to state police records. 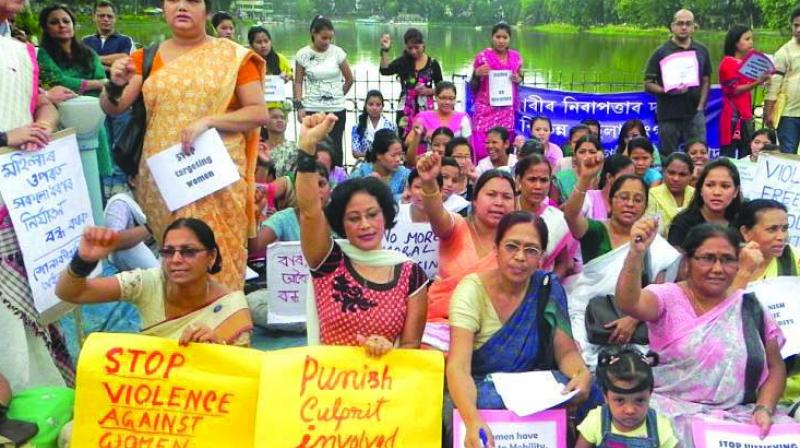 Many women organisations are up in arms, protesting cases of violence against the fair sex in Assam.

Every year, the number of domestic violence cases recorded has continued to surpass its previous year's figures. Official records released recently by the Assam police show an increase in instances of domestic abuse from about 2,200 cases recorded across the state in 2005 to 11,999 in 2018. According to the official records, the same figure was 10,580 in 2017 and 9,327 in 2016.

However, security experts in the state police department attribute it to growing empowerment of women. Pointing out that the cases of cruelty by husband are much higher in northern states but in a majority of them, women are not allowed to come out for justice, the experts in the state police force argued that in Assam, women are feeling more empowered and they come out to lodge cases highlighting their harassment at home.

Stating that the cases of cruelty by husband are generally covered under 498 A of IPC, the experts pointed out that this is also one of the most abused sections of IPC. “The misuse and abuse of this Act had reached to a level that the Supreme Court was forced to issue several guidelines to check its abuse,” pointed out a senior police officer dealing in crime against women.

The police records also suggest an alarming rise of cases relating to dowry-induced violence in the state. Police records stated, “As many as 166 women were allegedly killed by their in-laws for dowry in 2018. The numbers of dowry-related murders are also increasing in the state. There were some 150 such cases registered in Assam in 2017 and 2016 each.”

He however clarified that in cases of cruelty against women, there is a common tendency among the complainant (women) not only to mellow down but also go in for a compromise under social pressure. Asserting that in many of such cases witnesses also get hostile, security experts admitted that it is certainly a matter of concern, but the police have a very limited role in cases of domestic violence.

A previous study in 2017 led by the State’s Women Commission shows that around 83.7 per cent women, mostly in rural areas of the state, were physically abused by their husbands and family members. Besides being physically abused, women in rural Assam have been found to be facing verbal abuse from their husbands or in-laws for not bearing a child, especially a male child.

Moreover, some 34.1 per cent of women were even coerced into sexual intercourse.

Police records revealed that among the instances of domestic violence recorded in the state, the majority was reported in the districts of Golaghat, Jorhat, Sivasagar, Tinsukia, Darrang, Udalguri, Kokrajhar and Sonitpur.

Experts on crime against women are of the view that cases of domestic violence could be brought down by creating social awareness as well as initiative of women organisations.