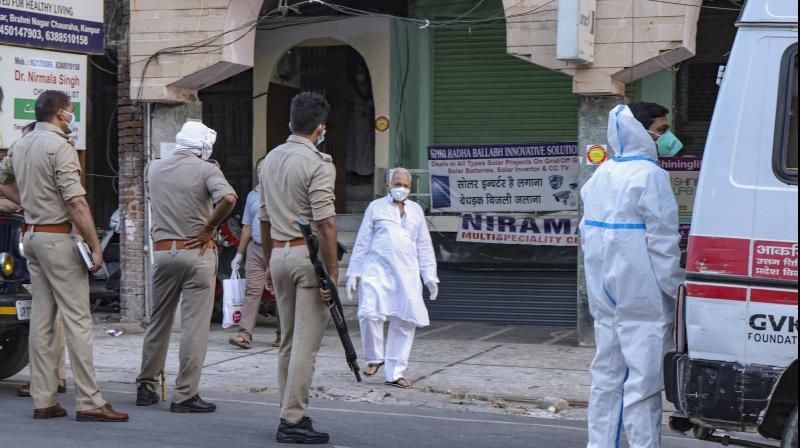 Police and medics escort a suspected COVID-19 patient as he walks to board an ambulance, during the ongoing nationwide lockdown, in Kanpur. PTI photo

New Delhi: India saw the highest single-day spike of 11,929 novel coronavirus cases in the last 24 hours, taking the number of infections to over 3.20 lakh on Sunday, while the toll crossed the 9,000 mark with 311 more deaths, the Health Ministry said.

This is the third day in a row there were more than 10,000 cases of the coronavirus disease (COVID-19) in India, which is the fourth worst-hit nation by the pandemic.

There are 1,49,348 active COVID-19 cases, while 1,62,378 people have recovered and a patient has migrated. The total confirmed coronavirus cases rose to 3,20,922, including 9,195 deaths, according to the ministry data updated in the morning.

The number of recoveries are more than the active cases as 50.60 per cent of the patients have recovered so far, an official said.

There were 20 more fatalities in Uttar Pradesh, 12 in West Bengal and 10 in Rajasthan. Haryana and Telangana registered eight more coronavirus deaths each, followed by seven in Madhya Pradesh, three in Bihar.

The number of fatalities reached 82 in Andhra Pradesh, 81 in Karnataka, 78 in Haryana and 65 in Punjab. Jammu and Kashmir has reported 55 COVID-19 deaths, followed by 39 in Bihar, 23 in Uttarakhand and 19 in Kerala.

Odisha registered 10 deaths so far, followed by eight each in Jharkhand and Assam, and six each in Chhattisgarh and Himachal Pradesh.

Five people have succumbed to the contagion in Chandigarh, followed by two in Puducherry, and one each in Meghalaya, Tripura and Ladakh, the ministry said.

More than 70 per cent of the deaths have happened due to comorbidities, it added.

The number of coronavirus cases rose to 449 in Manipur, 437 in Ladakh and 345 in Chandigarh.

Puducherry has registered 176 COVID-19 cases so far, followed by 163 in Nagaland, 107 in Mizoram and 87 in Arunachal Pradesh.

Sikkim has 63 COVID-19 cases, while there are 44 infections in Meghalaya and 38 in the Andaman and Nicobar Islands.

Dadar and Nagar Haveli and Daman and Diu have registered 35 COVID-19 cases so far.

The figures are being reconciled with the Indian Council of Medical Research, the ministry said, adding that 7,436 cases were being reassigned to states.

Statewise distribution is subject to further verification and reconciliation, it added.