The Colaba weather station in Mumbai recorded 1.5 mm rainfall between 8:30 am and 5:30 pm on Saturday 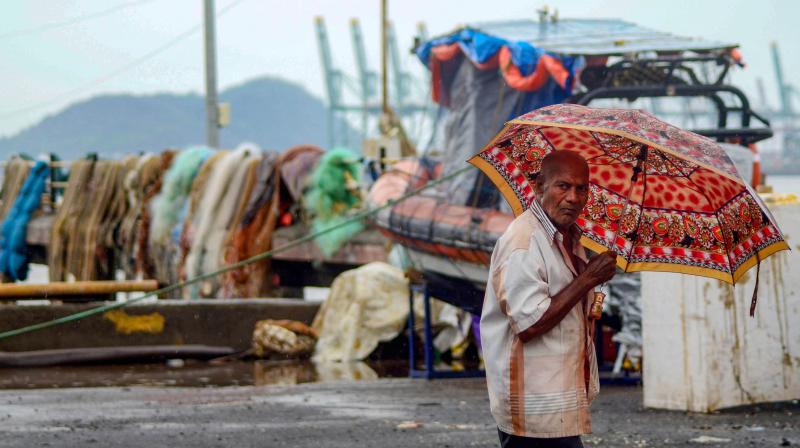 A fisherman holds an umbrella as he walks during rainfall in Mumbai. PTI photo

Monsoon has arrived in most parts of Maharashtra with parts of the state, including Mumbai, receiving rainfall on Saturday. Monsoon is expected to cover the rest of Maharashtra in the next 24 hours, an IMD official said.

“Monsoon has arrived in most parts of Maharashtra. (Today) rainfall was reported in Harnai (in Ratnagiri) in Konkan, Ahmednagar in central Maharashtra, Aurangabad in Marathwada and Gondia in Vidarbha. In the next 24 hours, the rest of Maharashtra is expected to be covered,” the official said.

Heavy rainfall was reported at two places in Ratnagiri at 8.30am while some parts of Sindhudurg, also a coastal district, witnessed “very heavy” rainfall, he said. “Over the next four to five days, Konkan, central Maharashtra, Marathwada, Vidarbha are likely to receive heavy to very heavy rainfall,” the official added.

The Colaba weather station in Mumbai recorded 1.5 mm rainfall between 8:30 am and 5:30 pm on Saturday, while the Santacruz bureau recorded 2.1 mm rainfall during the same period.

Meanwhile, the Regional Meteorological Centre in Mumbai issued a warning at 5:30 pm, predicting occurrence of “thunderstorm accompanied with lightning, intense spells of rain and gusty winds speed reaching 30-40 kmph” at isolated places in the districts of Mumbai, Palghar, Hingoli, Parbhani and Jalna in the next few hours.