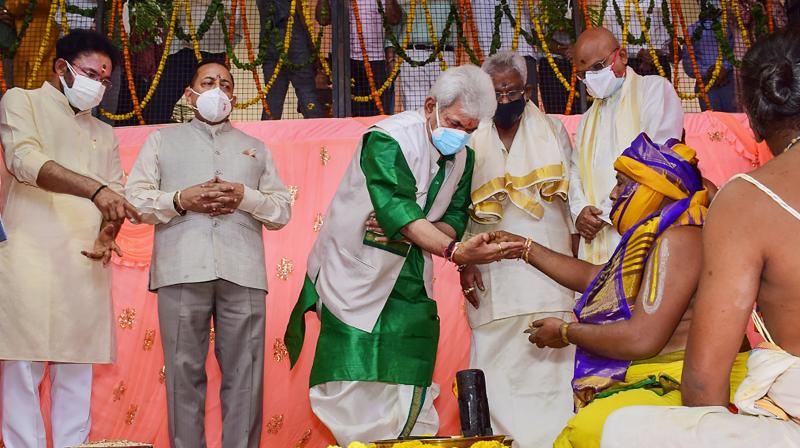 SRINAGAR: The work began for erecting a magnificent temple and allied infrastructure at the behest of the Andhra Pradesh-based based Tirumala Tirupati Devasthanams (TTD) in Jammu and Kashmir’s winter capital, Jammu, on Sunday.

J&K’s Lieutenant Governor Manoj Sinha unveiled the plaque marking the laying of foundation stone and attended the bhumi pujan ceremony. The temple is expected to be completed in 18 months in two phases, at a cost of Rs 33.22 crore.

Among those present at the ceremony included Union ministers Jitendra Singh and G. Kishan Reddy, chairman of TTD Board Y.V. Subba Reddy, and a member of the national executive of RSS, V. Ram Madhav.

“This is a historic and proud day for J&K,” he said and asserted that the temple, besides being a centre of faith and spirituality, “will open up opportunities across sectors in Jammu, giving a major push to religious and pilgrimage tourism, boosting the economy of the region”.

Some 20 months have passed since the Centre stripped J&K of its special status by repealing Articles 370 and 35A of the Constitution and also refashioned it into two Union Territories of J&K and Ladakh.

J&K’s administrative council under Sinha had in April this year allotted 496 kanals and 17 marlas (62 acres) of land to the TTD for building the Sri Venkateswara Swamy Temple at Majeen on the peripheries of Jammu city.

Article 35A had empowered J&K Assembly to define a J&K resident and guaranteed special rights and privileges to them and thereby prohibited non-permanent residents from permanent settlement and from acquiring immovable properties, government jobs and scholarships in the state. However, those willing to supplement the erstwhile state’s development and economic growth would be provided with land and other immovable possessions on temporary or lease basis under strict regulations.

The TTD has been allotted this land on lease for a period of 40 years. "TTD, a board established by the government under the TTD Act, 1932, is a charitable organization of international repute with a proven track record in the spiritual, cultural, social and educational sphere," a statement issued by the J&K government said.

Sinha said the TTD board will establish a Gurukul and Veda Pathshala within the complex to promote Sanskrit language and ancient culture of Vedic teachings and learning. “The board has also agreed to set up centres of excellence in the field of healthcare on the lines of its excellence centres in Andhra Pradesh,” he said.

He thanked the TTD board and the central government “for fulfilling the long-pending wish of the people of J&K and North India for establishing the temple of Lord Balaji on the land of Shri Mata Vaishno Devi”.

He promised that except for the main pujaris of the temple and the core supervision team, it will also have a large number of local people for the management, thus providing direct and indirect job opportunities to the people of the region.