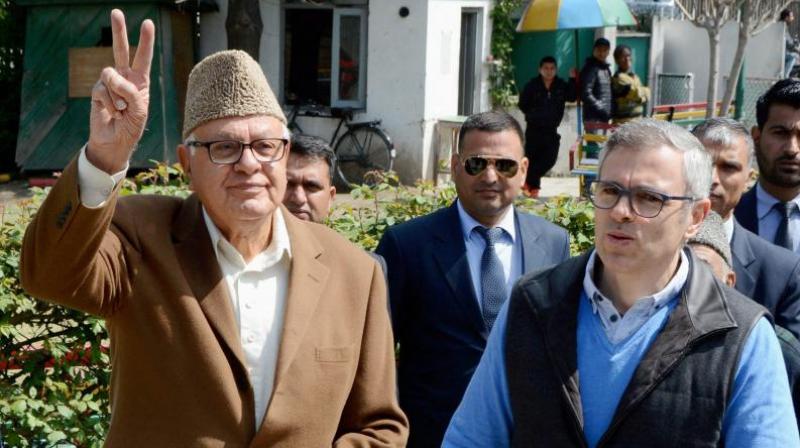 Srinagar: A bunch of habeas corpus petitions seeking the release of 16 senior leaders of the National Conference (NC) from detention at their residences have been filed by the party's president Farooq Abdullah and vice president Omar Abdullah, who have contended that they were being held in "brazen violation" of the constitutional guarantee of right to liberty.

According to the writ petitions filed under Article 226 of the Constitution, NC general secretary Ali Mohammed Sagar, provincial president Nasir Aslam Wani, senior leader Aga Syed Mehmood, party's chief spokesman Aga Syed Ruhullah Mehdi, among others, were being detained at their residences illegally and wrongfully without serving them with the grounds for such action.

The leaders have been forcibly restricted to their homes by police personnel stationed outside for the past 11 months.

The Abdullahs, who were taken into preventive custody on the intervening night of August 4 and 5 hours before Jammu and Kashmir's special status was revoked by the Centre and then detained under the stringent Public Safety Act for several months, have pleaded that the detainees be set at liberty.

The petitions were filed before the registrar of the high court by advocate Shariq Reyaz.

The party leadership moved the high court after the petitions of these detained leaders to the Home Secretary of Union Territory on June 30 seeking removal of restrictions on their movement and set them at "absolute liberty" remained unanswered.

The party on Monday issued a statement saying the habeas corpus petitions were filed in the high court, challenging "the unconstitutional and illegal house detention" of senior leaders and functionaries.

Party spokesperson Imran Nabi Dar said the decision to approach the high court has been taken as a resort to provide relief to various party members who have continuously been under house arrest or were kept under house detention after being released from custody under the stringent Public Safety Act.

"Shifting of the detainees from detention centres to their homes only characterised revolving-door detention practice. Quashing of the PSA on the party general secretary underscored the indefensible nature of all detentions in the court of law, leading us to believe that the administration will release all the detainees in the absence of any convincing reason behind it.

"Unfortunately that was not to be. The house detentions without any administrative orders are unlawful, undermining due respect to human rights and individual liberty," he said.

The spokesperson expressed hope that the judiciary will come to the rescue of their colleagues, who have been suffering for no fault ever since the abrogation of Jammu and Kashmir's special status and bifurcation of the state into union territories on August 5, 2019.

"This was the only recourse left to us. We are hopeful that the court will uphold the civil liberties of our colleagues most of whom have not been keeping well," the spokesman said.