India   All India  14 Aug 2019  Forces cautious ahead of Pakistan’s I-Day
India, All India

Forces cautious ahead of Pakistan’s I-Day

As terror fear looms large, forces to ensure no Pak flag is seen in Valley. 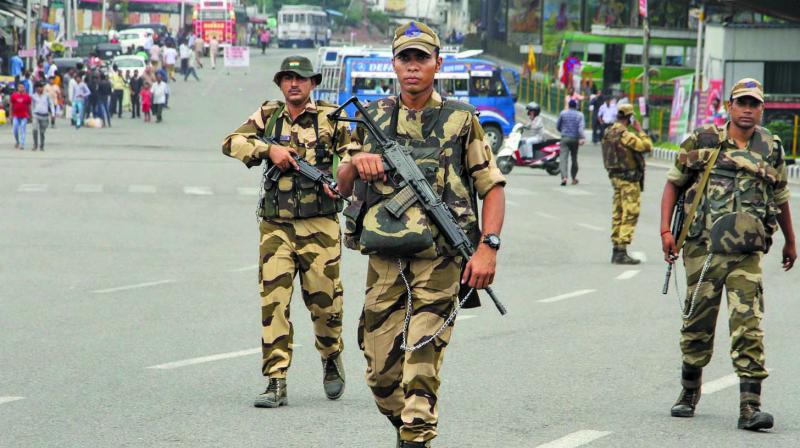 Security personnel patrol in Jammu on Tuesday ahead of the 73rd Independence Day. (Photo: PTI)

Srinagar: Waving of Pakistani flags or erecting dozens of them on rooftops, electricity poles or towers beginning from Srinagar and extending into downtown and to South Kashmir and few areas in North Kashmir was a common sight across the Valley over the last many decades.

Till 2018, this was in vogue not only inside the dingy streets of Valley, but one could also spot Pakistani flags in the main thoroughfares of Srinagar city. Back in July 2016, when Hizbul Mujahideen commander Burhan Wani was neutralised, Pakistani flags were reportedly seen at multiple places. But now, in a drastically changed scenario in Jammu and Kashmir, before the security agencies deal with the security scenario on India’s Independence Day on August 15 — for which massive preparations are underway, it first has to deal with August 14, Pakistan Independence Day, and the problems that come with it in the Valley.

As fears of a major terror strike looms large amid apprehensions of stone pelting incidents, the forces are gearing up to ensure not a single Pakistani flag is seen anywhere even as credible inputs trickling in suggest that trouble mongers, especially in downtown and South Kashmir, will do everything possible to make a Pakistani flag “seen” to the forces.

Highly placed sources in the security establishment told The Asian Age they have planned stringent restrictions for both August 14 and 15, they are determined to ensure not a single Pakistani flag is seen anywhere. “All relaxations that were given till today will no longer be given tomorrow and day after,” they said.

Each year on August 14, a section of Kashmiris organised referendum marches and offer special prayers for the stability of Pakistan while separatist leaders of both hardlline and moderate factions of the Hurriyat Syed Ali Shah Geelani and Yasin Malik issue “protest calendars”. They exhort people to observe August 15, India’s Independence Day as a “Black Day”.

“August 14 and 15 have always been important and we are taking all precautions,'” J&K DGP Dilbag Singh said. Already, the J&K police has taken into confidence committees of mosques and warned them against any kind of mischief.

Sources said that this time around, New Delhi is keen that there is no trouble, whatsoever on the ground especially on August 14 and 15.