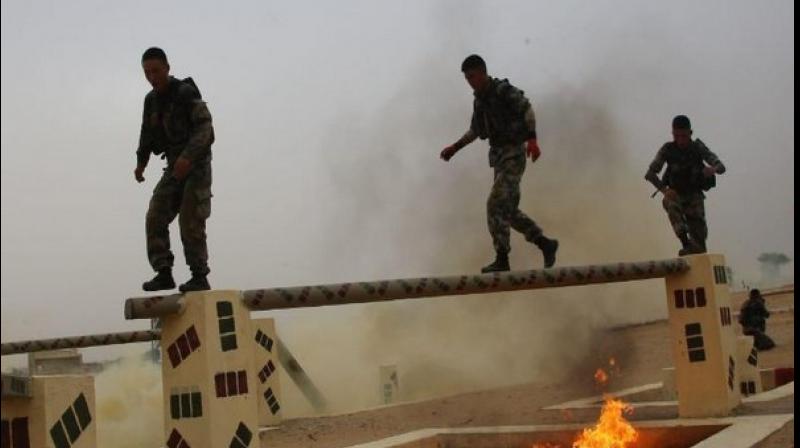 Indian Army is participating in the competition for the first time as hosts and their stupendous performance is a true reflection of their highest standards of physical fitness, training and professionalism. (Photo: ANI)

Jaisalmer: The Indian Army team on Wednesday continued its outstanding performance and has come first amongst 8 teams in Stage IV of ongoing International Army Scout Masters Competition being held at Jaisalmer Military Station under the aegis of Southern Command of Indian Army.

Stage IV of the competition primarily included timed reflex shooting, breaching of the minefield and checking of the close-quarter battle capability of all the teams under simulated battlefield conditions.

After Stage IV Indian Army has taken a comfortable lead in the competition while the team from Uzbekistan is running second followed by the teams of Russia, Belarus, Kazakhstan and China keenly competing for the third to sixth position.

Stage V of the competition is presently underway which shall conclude on August 16, 2019, with a grand closing ceremony at Jaisalmer Military Station. Indian Army is participating in the competition for the first time as hosts and their stupendous performance is a true reflection of their highest standards of physical fitness, training and professionalism.

The fifth edition of "International Army Scout Masters Competition" kicked off in Jaisalmer on August 5 and it will continue till August 16.

Jaisalmer military station is hosting the competition, which is happening as part of the international Army games.

A total of eight countries comprising of China, Russia, Belarus, Armenia, Kazakhstan, Uzbekistan, Sudan are participating in the event including the Indian Army team.

The previous four editions of the competition were held in Russia.

The competition comprises of five stages wherein Navigation Skills, Endurance, Marksmanship and Team spirit will be evaluated by a panel of international judges, arbitrators, and referees.