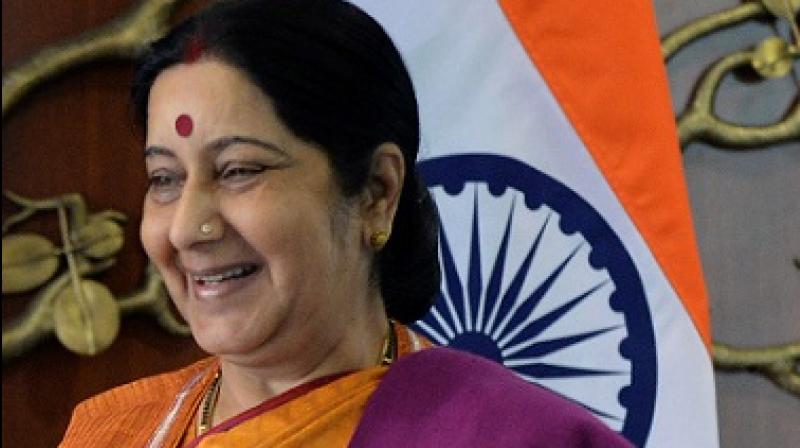 New Delhi: A great orator, an “epitome of bhartiya naari(Indian woman),” “ajaatshatru(one who has no enemy), firm on ideology, “role model” in politics, a minister who helped many Indians across the world and a devout Krishna Bhakt, this is how many remembered BJP’s Sushma Swaraj, 67, who passed last week after a massive heart attack. At the condolence meeting for the late leader and former external affairs ministers, leaders cutting across party lines, recalled how Swaraj’s “smiling face” and her unique quality of touching people’s heart, only earned her friends. The late leader’s husband Swaraj Kaushal and daughter Bansuri were also present.

Disclosing how she pre-empted any attempt by the BJP leadership to coax her to contest the 2019 Lok Sabha polls by publicly announcing that she will not contest, Prime Minister Narendra Modi recalled how she would be straight forward on things that needed to be done. Without mentioning his government’s decision on repealing Article 370 of the Constitution, Mr Modi hinted at her last tweet on the issue and said her daughter, Bansuri told him how she went with a happy heart.

Swaraj had tweeted on August 6 that she had been waiting to see this day in her life and few hours later suffered a massive heart stroke and passed away at the AIIMS.

“Her heart was filled with joy(over the government’s decision of doing away with the special status to Jammu and Kashmir)...wo khushi ke pal jeeti hui Krishna ke charon main chali gayi,” said the PM. Hailing her efforts to reunite Indians stuck abroad with their families, Mr Modi said external affairs ministry used to be known for “coat, pants, ties and protocols” but Swaraj changed the protocol to “oriented to people’s call” and exhibited the real meaning of “Vasudhaiva Kutumbakam by bringing back Indians facing difficulty anywhere in the world.

Sharing one of his experiences, Mr Modi said for his first address at the United Nations general Assembly in 2014, it was Swaraj, who firmly told him that he needs to prepare a speech, as per the protocol and told him straight forward that one has to abide by the protocols of some forums.

“She said ‘aisa nahi hota hai bhai (It does work like this brother)’...manmarzi se nahin bol sakte (you can’t speak what ever you wish)...You have to speak about India to the world. I was the PM and she was my colleague minister taking care of the external affairs ministry...I had taken a long journey...I was fasting and also not comfortable with written speech...But she insisted that I share my thoughts...She said aap boliye vichar boliye (you speak, express your thoughts)...we will prepare a draft of the speech. One may be a very good orator but there are some forums which have their own traditions. This was the first lesson Sushma ji taught me,” said Mr Modi.