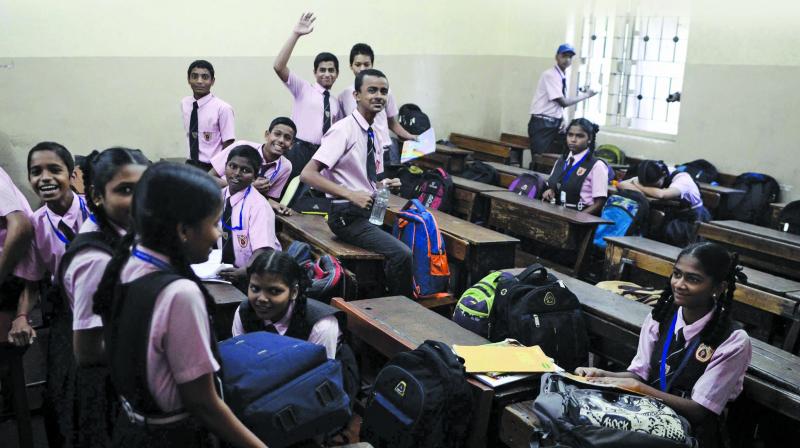 In a village in Madurai district, students from the Dalit community can’t enrol their children to schools. At least 65 FIRs are registered every year because of clashes between two students’ groups based on castes. (Photo: File | Representational)

Chennai: A major caste based discrimination system is unfolding in Tamil Nadu, with the Directorate of School Education busy cracking down on schools where children were made to wear wrist bands of various colours to segregate them on the basis of their caste, reported News18.

The governing body has directed senior officials to identify such schools and take action against those responsible for the discrimination. The Department has also asked for a report from all districts on what action has been taken in this regard.

“It is informed that the officer trainees of IAS 2018 batch lodged a representation to the Government where it has been stated that in some schools in Tamil Nadu, the students were made to wear colour coded wrist bands,” the circular dated July 21 2019 stated, reported by News18.

These bands come in shades of red, yellow, green and saffron to indicate whether they belong to a ‘lower or upper class’. In addition to this, rings and forehead “Tilaka” on the head were also used as caste marker.

“These practices are supposedly being used for sports team selection, reassembling during class and lunch intervals. Allegedly, these practices are enforced upon students themselves and supported by influential caste persons and teachers,” the statement added.

The department also asked district educational officers to identify such schools in the state and take ‘severe’ action against those responsible for such practices.

“All the Chief Educational officers are requested to take appropriate steps to identify such schools in their districts where such kind of discrimination is practiced and to issue suitable instructions to the Head Masters to prevent such practice immediately and also take severe action on the persons who are responsible for the discrimination,” the statement said.

Social activist Kadhir said that similar cases were brought to light from Tirunelveli district back in 2017, but it took the state government two years to ‘wake up’. “It’s not just the coloured bands. In government schools where midday meals are provided, students from the oppressed community are asked to bring their own plates. This discriminatory practice is observed across schools and universities, especially in the southern parts of the state,” she said.

In a village in Madurai district, students from the Dalit community can’t enrol their children to schools. At least 65 FIRs are registered every year because of clashes between two students’ groups based on castes, she added.