The congregation put out photo in media release issued to publish findings of enquiry commission. 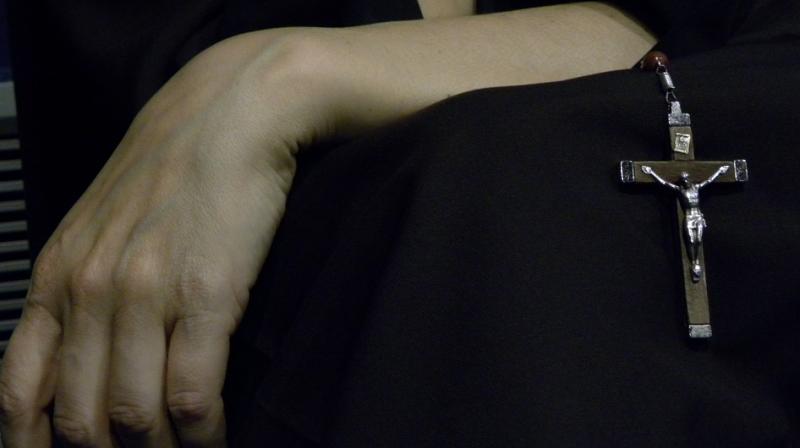 Missionaries of Jesus on Friday controversially released a photograph of the alleged rape victim and the perpetrator seated together in a group. (Representational Image | Pixabay)

Kottayam/Kochi: Flouting the country's anti-rape law, the Missionaries of Jesus, the congregation to which the nun who has accused the Jalandhar diocese bishop of rape belongs, Friday controversially released a photograph of the alleged victim and the perpetrator seated together in a group.

The congregation put out the photograph in a release issued to the media to publish the findings of its enquiry commission, which looked into the nun's allegations.

Indian laws prohibit revealing the identity of rape and sexual assault victims. The congregation, however, cautioned against publishing the photograph, saying it cannot be held responsible if the press violates the rule.

It claimed that the May 23, 2015 photograph was taken when the nun was attending a private function along with Bishop Franco Mulakkal. They claimed that the nun had attended several such functions with Mulakkal.

The nun has never appeared in public or in front of media after filing the complaint.

In a press release, the congregation accused the victim, her five fellow nuns and four others of conspiring against the bishop. It alleged that the nuns had "violated the discipline of the congregation" several times and even refused to renew their vows-- a very important step in the life of a nun in a convent.

Framing charges against the nuns, the enquiry commission said the congregation was convinced that they were under the influence of "atheists" and their thoughts. It claimed that the visitors' register, a key evidence for establishing Mulakkal's presence in the convent in Kuravilangad where the victim nun lived, was handled by a nun very close to her and they might have tampered with it.

It also accused the victim and her fellow nuns of forcibly shifting to their room the control system of the CCTV cameras from that of Mother Superior. This, the release said, was done to destroy evidence that could reveal their role in the "conspiracy" against the bishop.

The enquiry report was released two days after Kerala police asked Bishop Mulakkal to appear before the probe team on September 19.

The congregation's action invited the ire of Agriculture Minister V S Sunil Kumar, who said it was "clearly illegal". Speaking to a TV news channel, he assured police action against those responsible for it.

The Catholic reform groups staging a protest at Kochi for the last several days seeking justice for the nun also slammed the congregation and said they would initiate legal action.

An office bearer of Kerala Catholic Church Reform Movement (KCRM) said it would initiate legal action against the congregation for disclosing the identity of the victim. He said the Supreme Court had recently observed that the identity of rape victims should not be revealed as they have the right to privacy and cannot live with such "stigma" all their lives.

"We will definitely initiate legal action against the congregation for humiliating her again and again. They are now engaged in naming and shaming the victim. We cannot agree with it," he said.

The nun had recently sought urgent intervention of the Vatican for justice and demanded the bishop's removal as the head of the Jalandhar diocese, questioning why the church was "closing its eyes to the truth" when she had mustered courage to make public her suffering.

She alleged that Bishop Mulakkal was using "political and money power" to "bury" the case against him.

The nun has accused the clergyman of repeated sexual assault between 2014 and 2016.

The bishop has, however, dismissed the allegations as "baseless and concocted", insisting she levelled charges against the catholic order as it had rejected her demand for favours.